This summer and fall, we were eagerly awaiting the return of Coquitlam sockeye, released into the river below the dam as smolts two years ago by the Kwikwetlem Salmon Restoration Program. Unfortunately, none of those nearly 5,000 smolts released returned this year.

Coquitlam sockeye were blocked from reaching their spawning grounds when BC Hydro (then BC Electric Railway) completed BC’s first hydroelectric dam in 1913. Since 2003, Kwikwetlem, Watershed Watch Salmon Society, BC Hydro, Fisheries and Oceans, and community members such as the Port Coquitlam & District Hunting and Fishing Club have been collaborating to restore this important run. 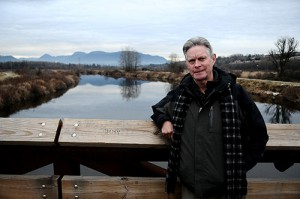 Earlier this summer, everyone was hoping that by now, we’d be celebrating the return of some Coquitlam sockeye. What happened?

Unfortunately, no fish at all came back this year. We extended the monitoring to hopefully see some late returning fish, but then we had a high water event that damaged the fence that diverts sockeye into the trap. The program’s now closed down for the year.

Were you surprised by this result?

Everybody had been feeling pretty optimistic that we’d see some fish return this year, but we were also realistic. We know that ocean survival is at an all time low for species like sockeye, and that’s been reflected in other extremely poor sockeye returns this year.

You must be feeling pretty disappointed.

This season has been really disappointing all round for people who depend on sockeye for food and ceremonial purposes and for the commercial fisheries that have had to close. And it’s been extremely disappointing to people like us who are trying to restore sockeye populations.

We maintain hope we’ll see some of these fish return next year. Generally, when smolts go out in the spring, they come back two years later, but sometimes, they come back three years later. So we may see some fish back next year. What we’re trying to do is wait out this really disastrous ocean survival problem we’re seeing in the Pacific right now.

What is causing this low ocean survival?

When the Cohen Commission of Inquiry into the Decline of Sockeye Salmon in the Fraser River looked at this, it reported three main causes for declines.

One was climate change and climate impacts on the food base. Sockeye eat zooplankton, and as the oceans warm zooplankton productivity goes down.

Another reason is the impact of salmon farms, especially in the Strait of Georgia. Wild fish pick up lice from farmed fish, and those lice have effects at population levels on Fraser sockeye. Far more scrutiny has also recently been placed on diseases from farmed salmon as also likely playing a role.

The third, and probably major factor, is competition from hatchery-raised pink salmon from massive enhancement facilities mainly in Russia and Alaska. In fact, recent science shows this problem is likely much larger than we thought. Pink salmon arrive at shared sockeye feeding sites a little earlier, and they may also be larger than sockeye, and it looks like they are good at competing for food. As the great Pete Broomhall once said, “There’s only so many groceries in the ocean.”  And when you pump in five or six billion hatchery-reared fish each year, there is not enough for everyone.

What are the next steps for restoring Coquitlam sockeye?

We’re just trying to figure that out right now. We’ll meet to debrief and explore options. Other than the hatchery project, we’re pushing for a water sustainability plan for the watershed that ensures that we have enough flows for all fish in the future. We’re also looking at fish passage issues more broadly, and at ways to improve habitat throughout the watershed.

It’s a bit of a downer of a question, but is there any hope for Coquitlam sockeye?

You have to maintain hope. I mean, we’ve been at it for 16 years, so it’s a bit wearing. But we have a lot of information on how to improve fish passage through technical studies that have been done. We’ve got funding to run the hatchery program for eight more years. Yes, I think everybody needs to maintain hope, but we also have to be real, that we need to ride out this really rough period of ocean survival.

Of course, it would have been really exciting to see Coquitlam sockeye come back this year, but we are doing our best, and that’s really all you can do right now.