Another big win for wild salmon at LMLGA!

Another big win for wild salmon at LMLGA! 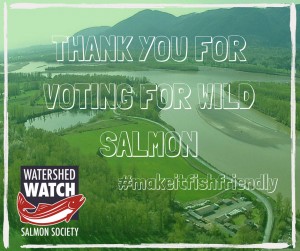 Wild salmon have had another major win! After receiving over 200 letters of encouragement, local governments of over 33 municipalities on the lower mainland passed a resolution to improve fish habitat impacted by flood control at the Lower Mainland Local Government Association (LMLGA) meeting last week.

The resolution they passed calls on the provincial government to consider fish and habitats in their flood management and to provide funding for installing fish-friendly flood control infrastructure. (The full wording of the resolution is pasted below.)

Lina Azeez, our Connected Waters campaigner, attended the LMLGA to advocate for this resolution and to present on the benefits of green infrastructure and implications of current legislation. She co-presented with Stephen McGlen of Sumas First Nation and Deborah Carlson from West Coast Environmental Law.

We send our heartfelt thanks to all the lower mainland municipalities who passed this important resolution.

This resolution will now be brought to the Union of B.C. Municipalities meeting in September to be voted on by all municipalities in B.C. With the 33 LMLGA municipalities standing up for  salmon and healthy habitats, the campaign to rebuild salmon habitat in the lower Fraser has taken a major step forward.

If you’ve not done so already, take a moment to sign our petition to keep the pressure on our Federal and Provincial governments and learn more at www.connectedwaters.ca

Whereas the Fraser River is home to more salmon runs than any other river in the world, and many of these runs are affected by outdated municipal flood control infrastructure that blocks or harms salmon streams;

And whereas the Ministry of FLNRORD administers the Water Sustainability Act, and administers funding programs to replace aging and inadequate flood protection infrastructure:

Therefore be it resolved that the provincial government be requested to improve their oversight of flood infrastructure maintenance and improvements, to include consideration of ecological connectivity and aquatic ecosystem health;