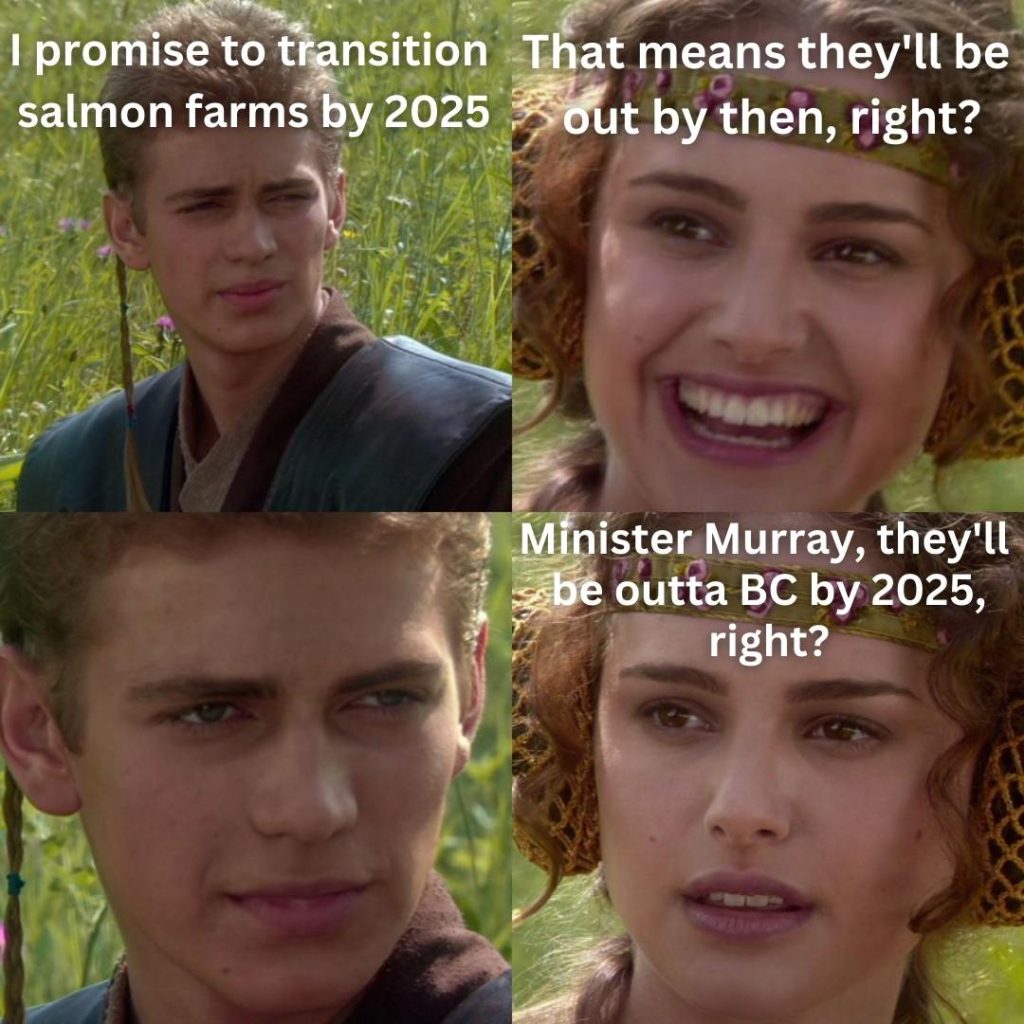 In an agency already under fire for industry capture and lack of transparency, 2022 has been a particularly damning year in Joyce Murray’s department of Fisheries and Oceans. First it was discovered that DFO scientists purposefully misrepresented steelhead data collected by their peers at B.C.’s Ministry of Environment to avoid listing the species as endangered, next an Access to Information Request has revealed staff changing Ministerial mandate letters so they can pursue their own agenda of derailing a federal promise to get fish farms out of coastal waters by 2025.

The Prime Minister made this written promise to Canadians in two mandate letters to the Minister of Fisheries and Oceans about B.C. salmon farms. He wrote one letter to Minister Bernadette Jordan on Dec 13, 2019, and another to Minister Joyce Murray on Dec 16, 2021.

The exact wording of the promise is:

Many British Columbians understood this promise to mean exactly how it sounds: that the factory farms would be gone by 2025. And there were signs of progress. The Discovery Islands farms were removed, and the minister did not back down from the ensuing industry led court challenge. However, after reading DFO’s report released this summer outlining their initial path forward on this promise, we were flabbergasted. Mention of actually removing salmon farms was largely absent from the report; hence, we started requesting documents from DFO through the Access to Information Process.

We received documents that appear to show aquaculture staff at Fisheries and Oceans Canada (DFO) watering down the meaning of the promise made by Prime Minister Trudeau to transition from open net-pen salmon farms in B.C. In particular, two committees dominated by DFO Aquaculture staff altered the wording in several instances:

“Fisheries and Oceans Canada (DFO) is undertaking work to meet the ministerial mandate commitment to develop a plan by 2025 to transition marine finfish open net pen aquaculture in British Columbia.”

“The Minister of Fisheries and Oceans Canada (DFO) has been mandated by the Prime Minister to work with the Province of British Columbia (BC) and Indigenous communities to create a responsible plan (the Plan) to transition open net-pen farming in coastal BC.”

You can read our full summary of the government documents for yourself. We still believe the Minister of Fisheries and Oceans, Joyce Murray, wants to do the right thing but she’s hampered by some rotten apples in DFO.

The federal government currently has an online survey for citizens to fill out on the salmon farming transition. We’re not convinced filling out the entire survey is the best thing to do to get fish farms out, because DFO Aquaculture may just cherry-pick the answers they want from it. But if you want to help, there is one question that you can skip-to and answer to make things crystal-clear for them. It’s the question below.

Just go to the DFO survey and scroll down and you’ll find this question and click on the first answer. This will send an unequivocal message to DFO to get farms out.

You can also use our email tool to send a clear message to DFO and your MP.