It’s a moment to celebrate! Last week, at the Union of B.C. Municipalities conference in Whistler, local government representatives from all over the province passed three important resolutions for wild salmon. 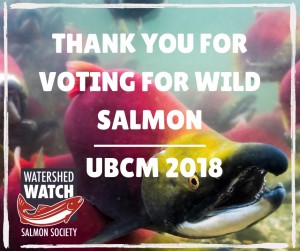 Resolution B118 – Protection of Native West Coast Salmon was another vote against open net-cage salmon farms. It asks the Province to enact legislation to protect B.C.’s wild salmon from the negative impacts of commercial salmon farms.

Resolution B119 – Upgrade Flood Infrastructure to Consider Fish and Access to Fish Habitat was inspired by Watershed Watch’s Connected Waters campaign, and calls on the provincial government to consider fish and habitats in their oversight of flood infrastructure and to provide funding for installing fish-friendly flood control infrastructure as upgrades are needed.

(Find the full wording of the resolutions below.)

Watershed Watch sends out a huge thank you to the local representatives who championed these resolutions and supported them through the process.

And we also want to thank all the Watershed Watch supporters who wrote hundreds of letters to their councils over the past year, helping these resolutions get approved first locally, then regionally, and finally on a province-wide scale.

Decisions at UBCM send a powerful message to the Province and the federal government that British Columbians value wild salmon.

Whereas British Columbia’s coastal communities rely on healthy waterways and healthy marine ecosystems including fisheries for economic, social and ecological wellbeing and where the proliferation of open-net fish farms with non-native fish species threatens local waterways and wild fish species, undermining the economic, social and ecological wellbeing of local communities;

Therefore be it resolved that the Province of British Columbia consult First Nations governments, local governments, conservation organizations and industry on a transition plan to closed-containment aquaculture, including a just transition for affected workers.

Therefore be it resolved that UBCM urge the Province of British Columbia to enact legislation that would protect British Columbia’s wild salmon stock from the negative impacts of commercial salmon farms.

Whereas the Fraser River is home to more salmon runs than any other river in the world, and many of these runs are affected by outdated municipal flood control infrastructure that blocks or harms salmon streams;

And whereas the Ministry of FLNRORD administers the Water Sustainability Act, and administers funding programs to replace aging and inadequate flood protection infrastructure:

Therefore be it resolved that the provincial government be requested to improve their oversight of flood infrastructure maintenance and improvements, to include consideration of ecological connectivity and aquatic ecosystem health;