By Stephanie Wood, this piece was originally published in The Narwhal on June 30, 2020.

Some folks call flood pump stations “meat grinders.” These pumps are common along B.C.’s Fraser River, where they remove water from nearby streams when levels get high and pump it into the river to prevent flooding. But fish and amphibians can get sucked in with the water, said Lina Azeez, campaign manager for Watershed Watch Salmon Society. 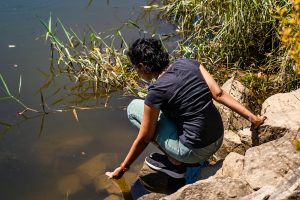 “They grind them up in the machinery,” she said. “That’s a huge problem.”

Other flood infrastructure — such as dikes, floodgates and pumps — blocks fish passageways and makes potential spawning areas unreachable. As part of an ongoing mapping project, Watershed Watch has found 1,500 kilometres of current or potential fish habitat in the lower Fraser and its tributaries is blocked by flood infrastructure.

Many of these flood structures are due to be upgraded in response to sea level rise, increased seasonal flooding or aging. Hill said governments now have a chance to build innovative, fish-friendly structures such as pump stations that don’t catch fish or floodgates that open and close with the tide unlike older models that remain closed most of the time.

Natural infrastructure can also be harnessed to provide flood protection without disrupting wildlife. Lakes and ponds can help absorb freshet, while wetlands and vegetated areas absorb water and stabilize soil. A 2018 Insurance Bureau of Canada report found that natural infrastructure is “cost effective” by design but “underutilized.”

“There’s this tremendous opportunity to open up a whole bunch of habitat by putting in flood control structures that are better for salmon and also keep our communities as safe or even safer from flooding,” Hill said.

The reality of flood risk has been looming over B.C. after above-average spring snowmelt in May caused the biggest flood in Williams Lake in approximately 200 years, triggering a state of emergency. A recent analysis by the World Resources Institute found that without major investments in flood protection, the number of people affected by coastal and river flooding each year could more than double by 2030. About 350,000 people live in the Fraser floodplain and are at risk of floods. The Fraser Basin Council estimates a major flood could cost up to $30 billion in damages. The NDP government committed $519 million to wildfire and flood preparation and response in its 2020 budget. 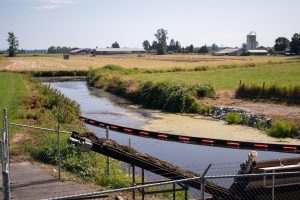 Hill pointed to Pitt Meadows, about 40 kilometres east of Vancouver, where community members have seen hundreds of dead fish at the McKechnie pump station. Despite this, the city has received one government grant and applied for another to replace two other pump stations with models that are just as harmful to fish.

“Fish-friendly pumps are not requirements of these grant applications, but they were carefully considered,” the city said in a March 5 statement. The city added that it consulted with the B.C. Ministry of Environment and Climate Change Strategy and Fisheries and Oceans Canada and found that fish-friendly pumps would spread invasive species and affect native species, including salmon. Fish-friendly infrastructure allows the free movement of fish — invasive and non-invasive species — whereas traditional infrastructure can kill them.

“We have our federal aquatic species regulation, which prevents us from moving or transporting invasive species, which we know we have in our water courses,” Samanatha Maki, director of engineering and operations services at the City of Pitt Meadows, said at a council meeting in February.

Azeez said both invasive and non-invasive fish have been killed by pumps in Pitt Meadows. She said the city is relying on the assumption that federal regulation allows for the killing of native species so long as invasive species are killed as well. But, she said, this is “not necessarily accurate.”

The Fisheries Act prohibits human activities and projects that result in the “death of fish by means other than fishing” and the “harmful alteration, disruption or destruction of fish habitat.” The Aquatic Invasive Species Regulations prohibits the release of invasive species and allows eradication of those species, but “the prohibition on harm to non-invasive species under the Fisheries Act continues to apply,” Azeez said.

She added there are more efficient ways to address the impacts invasive species can have on non-invasive fish, such as protecting and restoring habitat and improving water quality.

Another big obstacle for many municipalities is the cost of fish-friendly infrastructure, which can be more expensive up front than existing designs, Azeez said.

At the council meeting, Maki conceded this was a major factor in the recommendation to go with standard pumps. “One of the biggest drivers is cost, with fish-friendly pumps being twice the cost,” she said in reference to the capital cost. She added that the maintenance cost is “a bit of an unknown,” while the existing pumps are “reliable technology.”

Azeez and Hill want the government to adjust infrastructure funding requirements to advance fish-friendly options in collaboration with local governments and First Nations.

A spokesperson from the Ministry of Forests, Lands, Natural Resource Operations and Rural Development told The Narwhal by email the province “encourages” fish-friendly infrastructure, but local authorities are responsible for developing that infrastructure. 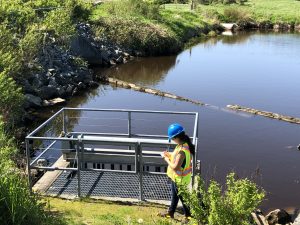 While municipalities use provincial money to build more non-fish-friendly infrastructure, the province and the federal government are investing in habitat restoration through the salmon restoration and innovation fund, which supports projects to protect and revitalize salmon populations. The almost $150-million fund will be distributed over five years.

In 2019, MakeWay (formerly Tides Canada) received almost $600,000 from the fund to identify priority sites and fund infrastructure upgrades at those sites that would also make way for fish. In one of those projects, Watershed Watch is helping Port Coquitlam upgrade its pump station and floodgate at Maple Creek.

“It’s been on Port Coquitlam’s to-do list for a while, but they never really had the money to do it,” Azeez said.

Maple Creek supports all seven species of salmon, as well as steelhead and cutthroat trout. But spawning grounds are blocked by a floodgate, a “big metal door” that blocks out aquatic life, said Laura Dupont, a Port Coquitlam city councillor. While the old floodgate remains closed most of the time, the new gate would remain open at low tide.

Dupont believes the payoffs will be fast. “Life comes back so quickly. Nature is so resilient,” she said.

“I would expect within one spawning season, we should see salmon returning and being able to spawn, and just letting life back into a waterway that’s been deprived of it for too long.”

In 2018, Dupont brought a resolution forward to the Union of B.C. Municipalities to prioritize fish-friendly flood infrastructure. The resolution passed and was presented to the province as a recommendation to consider for future decision-making. She said there needs to be a regional plan to bring back fish habitat in the Fraser.

“Municipality by municipality is so piecemeal,” she said, adding that she’d like to see enough funding to update all floodgates along the lower Fraser. While fish-friendly infrastructure may be more expensive, the payoffs can be huge.

In Washington state, public-private partnership Floodplains by Design issues grants for projects that reduce flood risk and restore habitat. Between 2013 and 2018, it funded 36 projects on 13 major floodplains thanks to US$115 million from the Washington legislature. The projects have removed 700 residences from high-risk floodplain areas, restored 40 kilometres of salmon habitat and protected 200 hectares of agricultural land.

In the Netherlands, severe flooding in the 1990s forced more than 250,000 people to evacuate and prompted the government to develop a more innovative approach to flood management. The Room for the River project, launched in 2007 and completed in 2018, lowered floodplains, created water buffers, relocated levees, increased the depth of side channels and built flood bypasses. 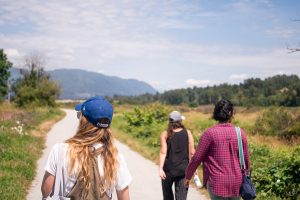 Azeez also pointed to the living dike project, a collaboration between the cities of Delta and Surrey and Semiahmoo First Nation. Instead of building an existing concrete dike higher to protect communities from sea level rise, which would mean encroaching on more land and vital salmon habitat, the coalition has launched a project to gradually increase the elevation of the foreshore over 30 years in hopes of providing natural protection and preserving the salt marsh habitat.

Looking at innovations that have taken place around the world and close to home, Hill said the fact that the Fraser River lacks an innovative flood management plan amounts to ‘government inertia.’ “There’s a lot of fear around moving away from the status quo,” he said. “But it really hasn’t served us very well.”