For generations, fishing families in B.C. have risked the resources they had in order to put a boat in the water. They navigated currents that bend with the coastline, holding out for the promise of fish. Pacific salmon sustained the government docks, shipwrights, and fish processing plants that made our coastal fishing villages economies unto themselves. Declining salmon returns are leading fewer and fewer of our commercial fishers to fill their holds with ice and try their luck. But every year, interception fisheries in Southeast Alaska are netting boatloads of Canadian salmon returning to their natal streams.

Alaska manages several net fisheries targeting pink salmon and troll fisheries targeting Chinook salmon in the interception zone in Southeast Alaska, along the B.C. border. The Canada-U.S. Pacific Salmon Treaty allows them to keep a substantial by-catch of non-Alaskan fish. However, the Treaty DOES NOT account for the impact of that by-catch.

While Canada is putting the brakes on our own fisheries to protect declining stocks, Alaska keeps fishing aggressively and increasing its percentage of the total catch. It’s unsustainable and unfair.

With DFO asleep at the switch, Watershed Watch joined forces with SkeenaWild to show the world how much of an impact Alaska’s interception fisheries were having on B.C. salmon. At the beginning of this year we released a landmark 236-page “State of the Knowledge” science report on Alaskan interceptions of B.C. salmon, which generated over 100 media stories. And then we launched a new campaign to fight back: Alaska’s Dirty Secret. 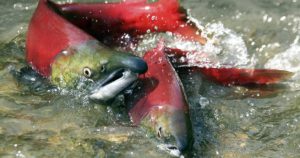 In 2022, our Alaska’s Dirty Secret campaign helped concerned citizens send over 1,000 letters to decision-makers, launched a parliamentary petition, inspired First Nations to speak out, and caught the attention of decision-makers, the public, and sustainable seafood labels like Ocean Wise. We tracked Alaska’s 2022 harvest in real-time and estimated that the 2.2 million Canadian salmon intercepted by Alaska this year cost our economy $100 million.

However, commercial fishing losses are just a small part of Alaska’s impact. First Nations in B.C., who have worked for decades to restore their fishing rights, are often finding too few fish remaining for food and ceremonial needs. Though we don’t know the precise impact Alaska’s mixed stock fisheries have on individual populations of depleted or endangered Chinook, sockeye and steelhead (whose run timing and migratory path coincide with peak interception windows) we know that a U.S. court found Chinook troll harvests in Southeast Alaska deprived Southern Resident Killer Whales of critical food. Data show 93 per cent of Chinook caught in the Southeast Alaska troll fishery are non-Alaskan-origin.

Looking back, we see we made a strong start on this campaign in 2022, but we know we need to ramp up our efforts in 2023.

We’re going to start the year by demanding the Pacific Salmon Commission put the District 104 and 101 fisheries under the microscope. It’s the first step towards one of our campaign’s goals, which is to make the Pacific Salmon Treaty more accountable to the plight of endangered Canadian salmon. Unfortunately, the Treaty table is a tough place to negotiate. Alaska bullies other U.S. states and Canada to get their way. So the second goal of this campaign is to raise legitimate questions about Alaska’s worldwide reputation as a sustainable seafood provider. Seafood buyers across North America and Europe in particular are beginning to understand that mixed-stock fisheries are unsustainable. We think Alaskan fishery managers and industry executives will pay more attention when their customers start raising concerns.

We will keep raising this issue with our partners, politicians and the public. We won’t stop until our elected leaders and seafood retailers move Alaska’s plunder of Canadian salmon to the front burner. 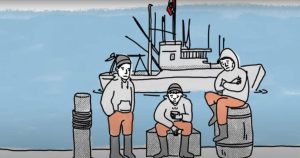 It will be a tremendous win to see Alaska move its predatory fisheries in District 104 and 101. Endangered Canadian salmon will be safer, and more opportunities for sustainable known-stock fisheries will return to Indigenous and non-indigenous communities. We’ll see an increase in the food available to Southern Resident Killer Whales. To get there, we’ll need to increase the pressure. I’m optimistic we can do that in 2023.