Our southern resident killer whales, now numbered at just 73 (Fall ,2021), face extinction if we do not take immediate and decisive action. The fate of these whales is intricately intertwined with decisions we make on managing our Fraser Chinook salmon populations. 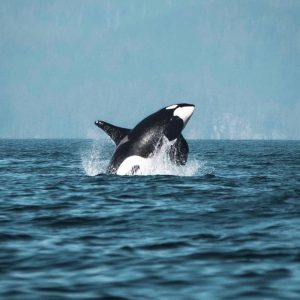 Southern resident killer whales (SRKW) are an ecotype of killer whale evolved to feed primarily on Chinook salmon (about 85 per cent of their diet). They also feed on chum in the fall, and steelhead in the winter. These whales spend their spring and summer foraging for Fraser River, Puget Sound and Columbia River Chinook salmon around southwest Vancouver Island and the Salish Sea.

Killer whales ‘see’ and understand their environment through echolocation, or sound. Hunting in family units, called pods, they communicate as they hunt and trap elusive Chinook against bottom obstructions or the shore. Similar to a wolf pack, they use teamwork to hunt, isolate, and kill Chinook, often sharing a Chinook on the surface after its capture. Their foraging success is dependent on the abundance and concentration of their preferred prey, and their ability to communicate through sound while underwater.

Southern resident killer whales rely on three areas of critical Chinook foraging habitat in Canada: from Barkley Sound on the west side of Vancouver Island to just above Sooke, around the bottom of Pender and Saturna Islands, and off the Fraser River. Chinook migrating to the Fraser prey on feed concentrated in these areas by currents and bottom structure.

Why are southern resident killer whale numbers so depressed?

The decline in numbers is due to a combination of factors. They have a low birth rate and long lives. Large numbers were taken for aquariums in the 1960s and early ‘70s, including many females. In recent years, the severe decline of their food supply, Chinook salmon, especially wild Fraser Chinook returning to the middle and upper Fraser March through mid-July, has led to high mortality and very poor reproductive success.

What is happening with Chinook?

Chinook salmon are large (though much smaller than they were a hundred years ago), were at one time relatively plentiful, and available much of the year.

Over the years, Chinook salmon abundance has been dramatically reduced through overfishing, habitat degradation, climate change, and changes in their marine environment. In the Fraser River, 14 of 16 Chinook populations have been assessed by the Committee on the Status of Endangered Wildlife in Canada as threatened or endangered, and will likely be recommended for listing under Canada’s Species At Risk Act. Only one Fraser population, the South Thompson summer run, was not at risk. A decade ago, Fraser Chinook salmon comprised up to 80 per cent of southern resident diets when they were in the Salish Sea.

Noise has something to do with it

Researchers have found the presence of vessels associated with recreational fishing and whale watching limits the whales’ abilities to effectively forage for Chinook because it increases competition for the limited number of Chinook available, can physically interrupt foraging activity, makes it more difficult for the whales to echolocate their prey, and disrupts their communication.

West coast Chinook fisheries (Canada and SE Alaska) harvest Chinook that are migrating back to their coastal rivers of origin in Canada and the US. These interception fisheries inherently overharvest diverse, small and less productive wild populations, contributing to local declines. Additionally, these fisheries occur on the rearing grounds of immature Chinook that are caught as bycatch. This is likely a contributing factor to the observed decline in Chinook size and age over the last 100 years. Further, these fisheries can remove more than half a million Chinook in a typical year that would have reached SRKW feeding grounds. In southern B.C., recreational fisheries targeting other Chinook populations encounter endangered spring Chinook returning to the Fraser River. 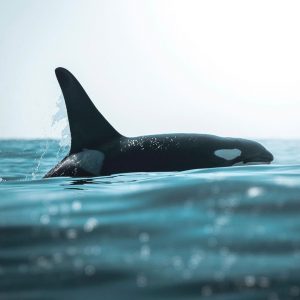 More than a decade of research by killer whale scientists is the basis for the relationship between low indices of Chinook abundance and high mortality rates of killer whales. Recently, a statement from UBC claimed Southern Resident killer whales don’t have a shortage of prey in the summer. This flowed from a prey abundance survey conducted during two weeks in the summer of 2019 and 2020 when Canada’s most abundant Chinook salmon, as well as other populations, were migrating to the Fraser River and Puget Sound.

It is well known that these salmon are abundant in our waters at this time of year, and evidence from drones suggests whales are generally in better condition in the summer than in the late winter and early spring. The UBC study asserted their claim based on a comparison with Chinook abundance in Johnstone Strait. The relative abundance of Chinook salmon over a two week period in two areas of critical habitat is interesting and worthy of further study that could link this with the presence and activities of killer whales. But to interpret it as having “debunked” the notion Southern Residents are prey limited, is a conjecture informed by a desire to make headlines, not by the evidence.

What about the jobs?

Conservation is rarely the reason jobs are lost. Protecting southern resident killer whales’ critical habitat from whale watching and recreational fishing does not mean an end to these industries. These critical habitat areas are small relative to the entire area available to whale watchers and recreational fishers. And ultimately, rebuilding both killer whale and Chinook salmon populations will benefit both fishers and eco-tourism operators. Further, reducing mixed stock Chinook fisheries will likely increase terminal fishing and eco-tourism opportunities on abundant populations, and the local employment that comes with them.

What has been done so far?

DFO and Transport Canada have been implementing measures to reduce physical and acoustic disturbance from vessels, and local competition from recreational fisheries. This includes agreements with commercial whale watchers to not follow Southern Residents, agreements with large freighters to slow down through critical habitat, closing some feeding areas to recreational fishing, and implementing interim sanctuaries.

The whales need 100 per cent protection in key critical habitat areas if we are to save them from extinction, including allowing migrating Chinook salmon to reach their feeding grounds

Please write to DFO and ask them to honour their obligation to protect and recover southern resident killer whales, and the Chinook prey they need, by addressing west coast mixed stock and IUU fisheries.

Please send your comments to Ashley.Dobko@dfo-mpo.gc.ca.

This piece was written in collaboration with our friends at Raincoast Conservation Foundation. Find out more about their work on their website.