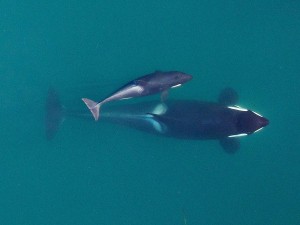 Our southern resident killer whales, now numbered at just 76, face imminent extinction if we do not take immediate and decisive action. The fate of these whales is intricately intertwined with decisions we make on managing our Fraser chinook salmon populations.

Southern Resident Killer Whales are a subspecies of killer whale evolved to feed primarily on chinook salmon (about 85 per cent of their diet). They also feed on chum in the fall, and steelhead in the winter. These whales spend their spring and summer foraging for Fraser River and Puget Sound chinook salmon around Southwest Vancouver Island and the Salish Sea.

Killer whales ‘see’ and understand their environment through echolocation, or sound. Hunting in family units, called pods, they communicate as they hunt and trap elusive chinook against bottom obstructions or the shore. Similar to a wolf pack, they use teamwork to hunt, isolate, and kill chinook, often sharing a chinook on the surface after its capture. Their foraging success is dependent on their ability to communicate through sound while underwater.

Southern resident killer whales  rely on three areas of critical chinook foraging habitat in Canada: from Barkley Sound on the west side of Vancouver Island to just above Sooke, around the bottom of Pender and Saturna Islands, and off the Fraser River.

Why are  southern resident killer whales numbers so depressed?

The decline in numbers is due to a combination of factors. They have a low birth rate and long lives. Large numbers were taken for aquariums in the 1960s and early 70s, including many females. In recent years, the severe decline of their food supply, chinook salmon, has led to high mortality and very poor reproductive success.

What is happening with chinook?

Chinook salmon are large (though much smaller than they were a hundred years ago), were at one time relatively plentiful, and available much of the year.

Over the years, chinook salmon abundance has been dramatically reduced through overfishing, habitat degradation, climate change, and changes in their marine environment. On B.C.’s south coast 9 of the 15 chinook populations DFO has adequate data for are endangered, and will likely be recommended for listing under Canada’s Species At Risk Act this year by the federal Committee on the Status of Endangered Wildlife in Canada.

Noise has something to do with it

Researchers have found vessel activity associated with recreational fishing and whale watching limits these whales’ abilities to effectively forage for chinook because it increases competition for the limited number of chinook available, can physically interrupt foraging activity, makes it more difficult for the whales to echolocate chinook, and disrupts their communication.

What about the jobs?

Protecting southern resident killer whales critical habitat from whale watching and recreational fishing does not mean an end to these industries. These critical habitat areas are a very small area relative to the entire area open to whale watchers and recreational fishers. And ultimately, rebuilding both killer whale and chinook salmon populations will benefit both fishers and eco-tourism operators.

What is being done?

DFO have identified five of their south coast management areas as critical habitat for southern resident killer whales, and announced their intention to close four of these areas to recreational chinook fishing to increase chinook availability and reduce noise and physical disturbance. However, this announcement is highly misleading and insufficient to effectively recover our whales.

The fifth management area of critical habitat around Sooke and Port Renfrew, where the majority of South Coast recreational chinook effort and catch is centered, is to be left open, which means impacts of competition for chinook and noise/physical disruption will only be reduced by (maybe) 40 per cent. Moreover, they have not announced a similar restriction on whale watching in the five management areas.

The whales need 100 per cent protection in key critical habitat areas if we are to save them from extinction.

Please write to DFO and ask them to honour their obligation to protect and recover southern resident killer whales by fully closing all the areas identified as critical habitat to recreational fishing and whale watching industries. Remind DFO their obligation is to conservation and future generations, not to two small, but noisy, industries: whale watching and recreational fishing.

Please send your comments to Ashley.Dobko@dfo-mpo.gc.ca by March 15, 2018.

Watershed Watch is working with other conservation organizations within the Pacific Marine Conservation Caucus to urge the federal government to implement measures to reduce competition for chinook and noise/physical disturbance in critical  southern resident killer whale habitat.