Dr. Patricia Gallaugher: Why I Give to Watershed Watch

Dr. Patricia Gallaugher is a decades-long supporter of Watershed Watch and a founder of both SFU’s Centre for Coastal Studies and ‘Speaking for the Salmon,’ a series providing public education on issues facing salmon. 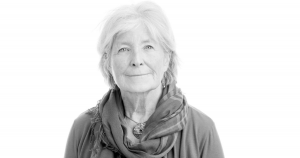 In 1995, Pat attended a meeting called “Getting the Missing Fish Story Straight,” where she met scientist and salmon advocate, Dr. Craig Orr. The meeting brought together around 50 people from different sectors to discuss the dismal returns of Fraser River sockeye.

Pat says she appreciated Craig’s approach at the meeting.

“Craig is a stellar example of a conservationist,” says Pat. “Everyone was pointing fingers at someone else, but Craig could connect with the academics, the scientists and the government people. That is exceptional for a scientist.”

It was the start of her long-term involvement with Craig’s work and the organization he founded, Watershed Watch Salmon Society.

Pat’s interest in salmon and conservation began when she was growing up in Howe Sound where her father worked with the salmon industry.

“My father knew all the industry people and even then, back in the 1970s and 80s, he would write letters to the government complaining that industry lobbying was destroying wild salmon. He would go to Ottawa and complain about that.”

Pat later moved to teach at Newfoundland’s Memorial University where she saw parallels between the cod fishery collapse and the situation with salmon on the Fraser River.

“The crash of the cod was unbelievable in Newfoundland, ” says Pat. “The scientists all warned the Minister of Fisheries that they were hitting a bottom point. But he was lobbied by industry and the cod fisheries collapsed. They could have saved it if they’d listened to the science.”

Watershed Watch’s commitment to science-based advocacy is why Pat says she has supported the organization for all of these years.

“Watershed Watch is doing important and critical work when it comes to saving B.C. wild salmon. When I look back on that first meeting with Craig, and on all the initiatives undertaken to protect salmon, Watershed Watch Salmon Society has been there every step of the way. As a scientist and a conservationist, I am happy to support your work.”