Eagerly Awaiting the Return of the Red Fish, an interview with Craig Orr

Coquitlam sockeye were blocked from reaching their spawning grounds when BC Hydro (then BC Electric Railway) completed BC’s first hydroelectric dam in 1913. Since 2003, Kwikwetlem, Watershed Watch Salmon Society, BC Hydro, Fisheries and Oceans, and community members have been collaborating to restore this important run.

This is an exciting time: 2 years ago, nearly 5,000 smolts were released into the river, below the dam, and this summer and fall, some of them are due to return as spawning adults.

Can you give a brief overview of the project to return salmon to the Coquitlam?

The Kwikwetlem Sockeye Restoration Program (KSRP), supported largely by the Fish and Wildlife Compensation Program, is all about restoring Coquitlam River sockeye. These fish were cut off from the lake where they spawned and reared juveniles, when the first, smaller dam (which had a fish ladder) was enlarged over 100 years ago (with no ladder). At the moment, for returning salmon to reach the reservoir, we have to catch them in a trap and manually move them above the dam.

There are “low level” fish outlets in the dam for smolts to get back down the river. But passage success is low, and we will likely need further engineering solutions which have been scoped out by consultants to safely pass more smolts into the river.

We have lots of studies, but we have not yet solved the issue. In the interim, two years ago, we released almost 5,000 hatchery-raised smolts below the dam. This summer, we hope to see some of these fish return, ready to spawn.

Were these the same genetic variety of smolts as the original Coquitlam sockeye?

When the dam was completed in 1913, Coquitlam sockeye were trapped in the reservoir. We found when we examined the surviving landlocked, or kokanee salmon, many retained the genes for anadromy, a century later!

So yes, the smolts we released in April 2017 are genetically similar to Coquitlam sockeye of the past. The survivors will come back if we get them past the dam. 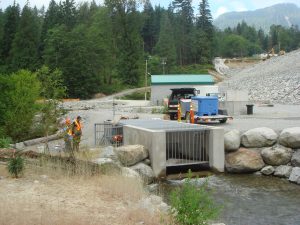 Fish trap below the dam on the Coquitlam River.

How many fish do you predict will come back from the 5,000 smolts you released?

At the high end, maybe 50. It doesn’t sound like a lot, but that will be more than have come back over the past century, collectively. Fifty would be amazing. Unfortunately current ocean survival is terrible, less than 1%.

Why is ocean survival so poor?

The 2012 Cohen Commission of Inquiry into the Decline of Sockeye Salmon in the Fraser River found three primary causes for Fraser sockeye declines. A major one is climate change impacting their ocean food supply. Another is competition with larger and earlier maturing pink salmon, mostly coming from hatcheries, and the third cause is salmon farms. Fraser sockeye are infested by lice when they pass salmon farms in the Strait of Georgia, and research suggests that these lice make them grow more slowly. Coquitlam sockeye are likely challenged by the same factors.

When do you expect the salmon to come back?

We expect them any time now. Once they were one of the earliest returning of all Fraser sockeye (as early as April and May), but lately, the few coming back typically return in August and September. We have someone checking the trap below the dam every day.

What will you do when they come back?

Adult fish will be captured in the trap below the dam, then transported to the Cultus Hatchery in Chilliwack to fertilize and rear eggs for the next release. This was not our original vision, using a hatchery. But we don’t yet have enough fish to maintain a wild fish only run, and this program provides valuable data on their life history, and buys time until ocean survival hopefully improves and numbers increase enough to sustain a completely natural run.

A celebration is planned. Kwikwetlem elders and KSRP members have a “first fish” ceremony planned for when the first fish comes back. Obviously no one will be eating any Coquitlam fish as they are too precious, just celebrating them.

Coquitlam sockeye have huge cultural importance to the Kwikwetlem. Their name in the Coast Salish language literally means “red fish up the river.” The dam infringed the rights of Kwikwetlem to collect food. In 1899, Kwikwetlem’s Chief Johnnie petitioned the federal government opposing the dam, but was ignored.

This is an expensive project. And we are still not seeing a lot of fish. But restoring these salmon is hugely important to the Kwikwetlem and local community.

What does it mean when they come back this year? Is this a big step towards restoring these wild runs?

It is tough to restore a population of fish on the brink. That’s why we should always be striving to prevent salmon declines. Restoring a population back to a resilient state is much harder. But we also cannot just give up. 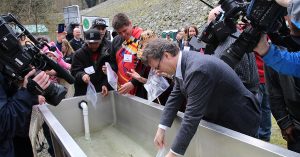 How can people find out if the salmon return this year?

You will hear about it! When 11 fish returned in 2008, it galvanized the community and generated much media attention. When we released smolts 2 years ago we were joined by elders, MLAs, MPs, mayors, community members, and a lot of those people want to be there when the fish they helped release come back. Kwikwetlem and Watershed Watch are also supported by the Earth Rangers program to let youth and others know when the red fish are up the river again.