Bryan Fogelman, owner operator of REO Rafting Resort has made the generous donation of a 2-person, 3 day, all-inclusive experience worth over $1,300 for participants in our #SalmonSpawnWatch social media campaign! We talked to Bryan about his family-owned and operated off-the-grid resort, and why he chooses to support Watershed Watch Salmon Society. Nb. (Find out how to enter the contest at the end of this post!) 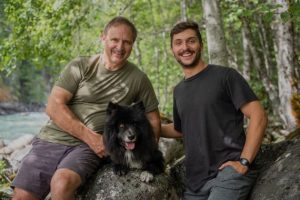 Bryan Fogelman, joined by his dog and son.

It was the early 1980s and Bryan Fogelman had just graduated with a Master’s degree in economics. In a move that would set the trajectory of his future, he decided to go rafting for the summer. Armed with a small raft he purchased in the United States, Bryan set out to pioneer the sport of rafting on B.C.’s smaller, more technical rivers.

His trip led him to the jade-green waters of Nahatlatch River in the Fraser Canyon. Spilling out of the Kwoiek Glacier, with three lakes at the headwaters and spectacular rapids, Bryan spotted bears swimming across the lake, scavenging for salmon.

It was the perfect place to build a rafting resort. So Bryan opened REO Rafting Resort, near Boston Bar, B.C. in 1983, right beside the rapids of the Nahatlatch.

One day in 1995, Bryan heard an earth-shattering sound. A landslide had occurred on the Nahatlatch, less than a kilometer from his rafting resort and coho, pinks, sockeye and steelhead couldn’t return to spawn — the slide effectively damming the river. Acting quickly, Bryan joined a coalition of First Nations, loggers and government officials, the crew needed to ensure the 1995 run could make it up the Nahatlatch, spawn and pass on their adaptations and gene pool to the next generation. The cooperative effort paid off, and 3,000 fish made it past the slide.

As the years passed, more threats began to plague the Fraser Canyon and its wild salmon. The upper Nahatlach was opened to large-scale industrial logging. Over 100 logging trucks a day drove by Bryan’s resort, carrying trees so large it took three trucks to haul a single log. By the year 1999, the whole upper Nahatlatch was destabilized. Log and jams began to occur in the river and rockslides, which block salmon from swimming up river, have increased as warm rains have come more frequently in the winter months.

Other changes followed; the once-glorious Kwoiek glacier has shrivelled up, reducing the late summer water flows.

“Our business is very susceptible to the same forces that are impacting salmon, and that’s one of the reasons I want to support Watershed Watch Salmon Society,” says Bryan.

“We’re on the river, we’re a river resort. We have four species of salmon that come up the Nahatlatch. There’s a bond between us and the salmon.”

Find out how to take part in our #SalmonSpawnWatch social media campaign and be entered to win an incredible 3-day getaway from REO Rafting Resort! 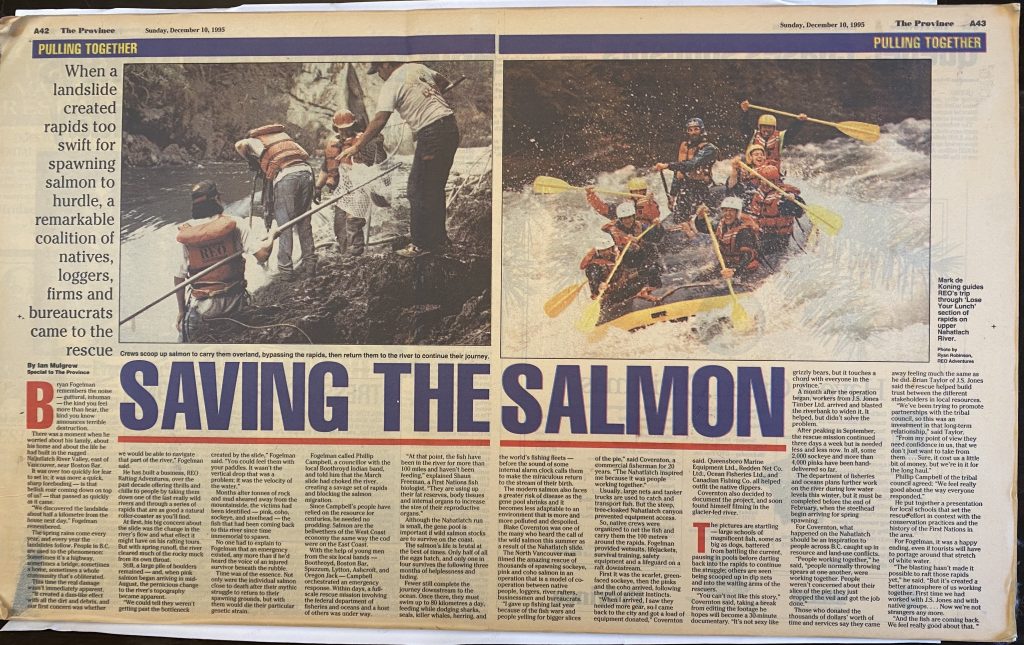