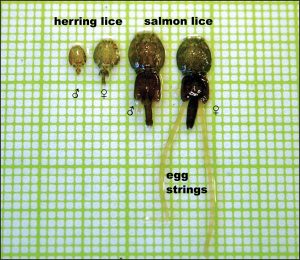 We all know parasitic lice from salmon farms can harm baby salmon. But did you know there are two species of sea lice that are a problem for farmed and wild salmon and one is essentially ignored by our federal government?

Parasitic sea lice from industrial salmon farms can spread to juvenile wild pink and chum salmon and kill them. Reams of science and news stories have been published on this. But there’s something about factory fish farm parasites that isn’t widely known.

In British Columbia, there are two primary sea lice species that infect fish farms and spread to wild salmon. However, the federal government turns a blind eye to one of these species, despite evidence of their impacts on wild fish.

The most frequently talked about species of sea louse is Lepeophtheirus salmonis, commonly known as salmon lice because they primarily attach to and feed off of salmon. Research shows that salmon farms can both amplify their numbers and spread them to juvenile pink and chum salmon. Scientists have also found that salmon lice from fish farms can cause wild pink, chum and coho salmon populations to decline.

Our federal government requires fish farms to control these lice on their farms during the wild salmon outmigration period from March 1 to the end of June; when the baby salmon are leaving their home river and heading for the open Pacific. However, if farms don’t control their parasite levels, guess what happens? Not much. There are no fines or any significant repercussions. The federal government lets the industry get off year after year.

We don’t hear much about the other species, Caligus clemensi, otherwise known as the herring louse. It can be found on many fish species including herring, salmon and stickleback. It’s also smaller in size than the salmon louse.

Even though herring lice are present on farm salmon, DFO does not require the industry to control them at all. And remember, one salmon farm can also trap and hold hundreds of thousands of herring that can likely breed copious amounts of herring lice.

During this outmigration, we’ll be keeping in close communication with our allies on the water. If those baby salmon are hit by factory farm lice, we will let our supporters know and we’ll provide an avenue for you to take action.