Alaska has a dirty secret. B.C. wild salmon are being scooped up in Alaskan commercial fisheries before they make it home to spawn according to a new technical report commissioned by Watershed Watch Salmon Society and SkeenaWild Conservation Trust. 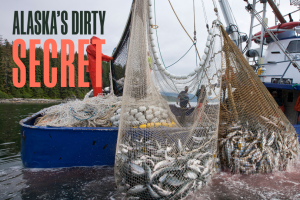 Many of B.C.’s largest salmon runs pass through Alaskan waters on their way home to spawn in Canadian rivers.

The report showed that while commercial fishing was nearly non-existent in B.C. last summer, Alaskan fleets just across the border logged over 3,000 boat-days, harvesting hundreds of thousands—and possibly millions—of Canadian sockeye, Chinook and coho and large but unknown numbers of Canadian pink, chum, and steelhead (many of which come from endangered populations).

When we received this report we were shocked, especially given Alaska’s reputation for sustainable fishing. We wrote the Governor of Alaska outlining the issue and sending him a copy of the report. Unfortunately, the governor’s response showed the Alaskan government is unwilling to protect BC salmon.

But we’re not backing down. Fishers and citizens of all stripes from all over this province say they’re fed up with the Alaskan plunder. Our next step is to get our own politicians to take action and we need your help.

Will you send a letter today to Canada’s Minister of Fisheries asking her to stand up for B.C. wild salmon and the communities that depend on them?

The majority of Alaskan harvest of B.C.-bound salmon takes place on the outer coast of the Alaska panhandle. In fact, most of the salmon and steelhead caught in this area are bound for streams in Canada, elsewhere in Southeast Alaska, or other US states such as Washington and Oregon.

Alaska’s interception fisheries near the B.C. border represent a small amount of their total catch, but are having a devastating impact on B.C. We are not asking Alaska to catch less fish, but to move their fishing efforts out of this relatively small area to allow B.C. wild salmon to make it home to spawn.

The Pacific Salmon Treaty will not be renewed until 2028, which is far too long to wait to resolve this issue, given the dire state of many B.C. wild salmon and steelhead populations. We need the governments of B.C. and Canada to take action on this issue today.