Lina Azeez: An update on Strawberry Island in Heart of the Fraser 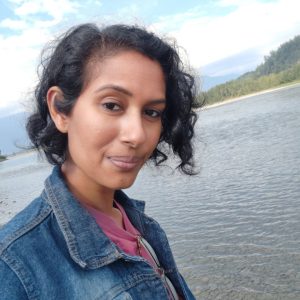 After learning in June about salmon habitat destruction on Strawberry Island in the Heart of the Fraser, Watershed Watch and our supporters kicked up a fuss and helped stop the unpermitted, and possibly illegal, activity.

Strawberry Island, just downstream of Nicomen Island, is in a highly sensitive and significant reach of the Fraser River that provides habitat for over 30 species of birds, fish and land animals, including the endangered white sturgeon and Fraser salmon.

Every year during the spring melt, Strawberry Island becomes important salmon habitat. Juvenile salmon escape the fast flowing waters of the Fraser mainstem, retreating into the slower waters and shallow pools on the island to rest, eat, and grow before continuing their journey to the ocean. Over the years, many in-river islands have been removed from the Fraser floodplain leaving salmon without these important refuge and nursery habitats.

When we heard about plans to ditch, drain and build a 4 km dike to create a cranberry farm, and about the unpermitted work already underway, we reached out to colleagues for advice and support, and sounded the alarm about the impacts of this activity on wild salmon.

We contacted the local First Nation to ensure they knew about the destruction and our intention to stop it.

We made sure federal and provincial staff were aware of the issue and submitted a report to the Provincial Report All Poachers and Polluters (RAPP) line, which launched an investigation into the habitat destruction.

In collaboration with BCIT’s Fish and Wildlife Program, we asked Ecojustice Canada to provide legal opinions to Fisheries Minister Joyce Murray and to the provincial water comptroller, Ted White – the primary decision-maker on issues of destruction of waterways. The letters requested immediate investigations into the potential compliance issues and for a stop-work order and habitat remediation under both the federal Fisheries Act and the BC Water Sustainability Act. (Read the letter to Minister Murray here and the letter to Ted White here.)

In a memo attached to the legal opinions, biologist Dr. Mike Pearson wrote, “It would be difficult to overstate the value of this wetland and its connecting channels as fish habitat.”

While in the field Dr. Pearson netted seven indigenous species of fish, including 52 juvenile salmon in a 650 m² area. According to his assessment, the area was actively used by at least 30,000 juvenile salmon in the flooded 375,000 m² portion of Strawberry Island at the time of sampling.

Upon hearing about the situation, our supporters sent over 2150 letters to federal and provincial decision-makers, providing the necessary pressure to send both levels of government scrambling to stop the work and set up meetings between the Nation, the landowner and government staff to figure out next steps. Due to your efforts, we are hopeful for the future of Strawberry Island.

The government’s swift response demonstrates the power of collective action. Thank you so much to everyone who took the time to send letters and share our posts. Slowly but surely, with your help, we will protect and restore the Heart of the Fraser.

Read more about how we discovered what was was happening on Strawberry Island.