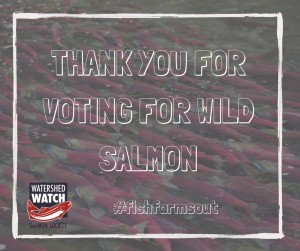 It’s a moment to celebrate! Local representatives from communities on Vancouver Island and the Sunshine Coast voted NO to open net-pen fish farms and YES to protecting wild salmon.

This weekend at the annual meeting of the Association of Vancouver Island and Coastal Communities, two important resolutions on open-net fish farms resolutions were passed. One resolution, brought by the City of Victoria, urges the Province to begin the consultation process for a transition from open net-pen salmon farming to safer land-based salmon aquaculture.  Another resolution brought by the District of Sooke, calls on the Province to protect our wild salmon from the diseases of commercial salmon farms.

This is a major win! Now these resolutions have been accepted by the AVICC, they can be brought forward at the Union of B.C. Municipalities to be voted on by all municipalities in the Province. This sends a huge message to the province and the feds that coastal communities value our wild salmon and the sustenance and jobs they provide.

Down in Washington, Atlantic salmon farms have now been banned, leaving B.C. as the last place on the west coast of North America that allows open net-pen fish farms. But the farms are still out there spreading viruses and parasites to the millions of vulnerable young salmon now swimming past them on their way out to sea. Let’s keep the pressure on until we get open net-pen fish farms and their diseases out of B.C.’s waters.