January 28, 2016 (Vancouver, B.C.)–  Managers with Fisheries and Oceans Canada misled the public last summer regarding the unscheduled closure of a commercial salmon fishery near Vancouver, according to emails obtained by the Watershed Watch Salmon Society through an Access-to-Information request.

The Howe Sound pink salmon fishery was scheduled to run from August 10 to 15, 2015, but was abruptly closed after only 2 days of fishing. It was rumoured at the time that fishermen had violated their prescribed fishing plan, but reporters, concerned citizens, and Watershed Watch were told by DFO staff that the fishery had been closed due to a lack of fish abundance. Newly released emails, however, clearly show that the fishery was closed because fishermen had violated the prescribed fishing plan.

“DFO’s story just didn’t add up,” said Dave Brown, a sport fisherman on the Sea to Sky Fisheries Roundtable. “We knew at the time that there was some kind of a non-compliance problem.”

It appears that one vessel fished outside of the designated area, far exceeded the daily catch limit while doing so, and ran aground in the process. The grounded skipper then called in another vessel to help offload his catch, which put 3 vessels on the fishing grounds where only 2 were allowed. No enforcement officers were present during the fishery.

“DFO did the right thing by closing the fishery, but it is clear now that they shouldn’t have opened it in the first place. First, they hadn’t identified a surplus of pink salmon for commercial harvest. And second, DFO didn’t have an adequate plan, license conditions, or stock assessment and enforcement resources in place to properly manage the fishery,” said Aaron Hill, Executive Director of the Watershed Watch Salmon Society. “What is really galling though, is how dishonest the Department’s managers were with us and the public about what happened out there,” continued Hill.

“Why did managers hide the truth from everyone?” wondered Greg Taylor, Fisheries Advisor at Watershed Watch. “It’s likely because they knew the underlying rationale for the fishery wouldn’t have stood up to scrutiny. DFO developed the fishery in a closed loop with industry,” continued Taylor. “They excluded First Nations, stakeholders, even other DFO staff, ignoring the broader conservation, management and policy considerations. So it should be no surprise that it went off the rails.”

“If a First Nation violated their Community Fishery Agreement with DFO, all their fishery equipment would be seized with federal charges,” said Randall Lewis of the Squamish First Nation and Sea to Sky Fisheries Roundtable. “It’s a different world for commercial fisherman; not even a slap on the wrist, let alone charges”.

The emails show local fishery managers working with a DFO communications specialist after the fishery closure to produce misleading “media lines” which were then approved by the Regional Director General and DFO’s National Headquarters in Ottawa.

“This whole episode is very emblematic of DFO’s cynical, industry-centric approach to managing fisheries and dealing with the public,” said Brown, “and it needs to change.”

In his Mandate Letter to Hunter Tootoo, Prime Minister Trudeau reminded the new Fisheries Minister that their government “…committed to set a higher bar for openness and transparency in government.”

“We are very encouraged by the new government’s commitments around improving how fisheries are managed,” concluded Hill. “This scandal presents a clear opportunity for Minister Tootoo to show British Columbians that their salmon runs are going to be managed in a more inclusive and transparent manner than they were in Howe Sound last summer.” 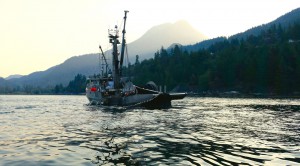 Sequence of events and guide to ATIP records

This scandal highlights a combination of problems that are essential to address for the future of harvest management in BC’s salmon fisheries. It is the culmination of an ad hoc evolution of fisheries management over the past several years, and sets a dangerous precedent for the future if the management approach that led to this scandal is allowed to continue.

1) A fishery was announced before there was any evidence of a surplus. Planning was founded on 2014 fry out-migration. Concerns were raised in-season by many stakeholders that the Squamish pink salmon return was not showing the same signs of abundance as it had in 2013, when the last fishery occurred (on the parental generation of this year’s run). Planning proceeded despite the fact that most pink returns from Southeast Alaska through to southern BC were returning well below expectations. The only positive signs were from the Pacific Salmon Commission’s (PSC’s) DNA testing, which DFO’s technical representative for the PSC said should be considered with some caution.

2) There was little transparent in-season engagement with First Nations or stakeholders. This fishery was put together between industry and DFO, with little understanding of either the concerns of, or the information and advice that might have been provided by, First Nations and stakeholders

4) The fishery was described both within, and outside, the development of the fishery as an assessment fishery that could guide future fisheries in the area. But there is no evidence that science was involved, or that it would provide scientifically defensible assessments. It also raised the question of why industry is now responsible for stock assessments, and if they are, what controls are in place.

5) The regulatory framework for using fish to pay for stock assessments changed following changes to Section 10 of the Fisheries Act in 2012. (http://www.dfo-mpo.gc.ca/fm-gp/policies-politiques/fish-allocation-finance-poisson-eng.htm#toc5). In this case, to ensure that the fishery was economically viable for participants, DFO agreed that each vessel could retain 25,000 pink salmon. It is unclear whether the fishery as structured was allowable under current regulations and this may be the reason that payment structure was never mentioned in any Fishery Notice involving this fishery.

6) The vessel Total Allowable Catches (TACs) and sharing agreements were never made public in any of the public notices. This part of the fishery was solely between the managers and industry. Watershed Watch’s position is that Canadians should be provided with information on how their public salmon resources are being allocated to private interests.

7) Since DFO and industry agreed on both the amount of fishing effort that would take place and the amount of fish each vessel could retain, it could be inferred (effort X catch) that DFO and industry determined a TAC for a fishery for which no surplus had been identified, and for which no in-season spawning escapement goal exists. There is no reason to believe this fishery would not have continued as planned, and the agreed-upon catch taken, if the one vessel had not so egregiously ignored the rules.

8) DFO had no enforcement presence arranged for the fishery. The information suggests that the first time DFO discussed the fishery with their Conservation and Protection branch (C&P) was the morning after the transgressions were identified.

9) C&P was not present on the grounds while the fishery was open. Information on location and catch was gathered by observers. However, it is unclear whether the information that identified the infractions came from the observers, or from reports by stakeholders.

10) DFO lied to First Nations, stakeholders, and public on the reasons for closure. There is no other way to describe it. Why? It could be that the underlying rationale for the fishery would not stand up to public, and possibly legal, scrutiny.

11) It is unclear if observer reports are publicly available in-season. In other BC commercial salmon fisheries we have been refused access to observer data because, as one manager told stakeholders and First Nations, “industry pays for them”.

12) DFO found out the hard way that if you give a fisherman a TAC in an assessment fishery where there is relatively low abundance and he will do what he can to catch the TAC (in this case ignore the rules), thereby contaminating the results of the assessment. This is why any assessment fishery must be carefully designed and managed, usually with stock assessment staff overseeing the fishery. The ATIP records indicate that DFO was aware of this potential outcome, but took insufficient steps to prevent it from occurring (i.e. not attaching the fishing plan to license conditions, not providing any enforcement).

13) This debacle happened on the south coast where there is (at present, at least) sufficient DFO staff, plus an engaged First Nation (Squamish), and considerable stakeholder presence. What would have happened in any number of more remote areas of the BC coast where these same conditions do not exist?

14) Finally, we only know any of this because they “got caught”. Presumably, this kind of back-room dealing and allocations would have continued unabated, and still could be, if the new Minister does not set a different tone and agenda.