On October 31st, 2012, the $26 million Cohen Inquiry Final Report, “The Uncertain Future of the Fraser River Sockeye” was released. It included 75 recommendations to government and has been quoted as a “blueprint” for salmon conservation.

It’s been over 6 months since the Report was released and where are we now?

Not only has government not responded to any deadlines in the Cohen Inquiry Final Report, many recent decisions and initiatives suggest they are taking steps that seem contrary to recommendations from the Inquiry.

Justice Cohen concluded that “the potential harm posed to Fraser River sockeye salmon from salmon farms is serious or irreversible,” and he recommended Fisheries and Oceans Canada (DFO) provide timely access to fish health data at salmon farms collected through routine monitoring, in part because pathogens and diseases associated with the industry pose a threat. Despite this, DFO has yet to post any salmon farm disease and pathogen data on its website.

“It’s been way over two years since any level of government has publicly reported fish farm disease data on their websites and 6 months since the Inquiry recommendations were tabled,” said Stan Proboszcz, biologist, Watershed Watch. “Levels of government responsibility and transparency are at all-time lows.” 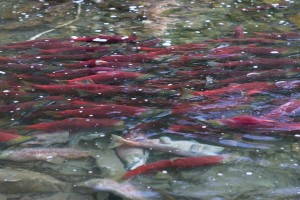 The Inquiry also recommended that DFO establish dedicated funding sufficient to carry out the implementation of the Wild Salmon Policy—a policy hailed by many conservationists as strong and progressive. But instead of setting up such a fund, government intends to make significant cuts to DFO—$4 million this coming year, $5 million in 2014-15, then $33 million annually for 2015-16 and subsequent years.

“Recent deep cuts to DFO’s budgets and staff are troubling,” said Craig Orr, Executive Director, Watershed Watch. “A nil response from government on the sockeye inquiry recommendations, given all the stressors identified by Justice Cohen, is irresponsible.”

The “Cohen Report Card” (www.watershed-watch.org/cohen-report-card/) provides an overview of Justice Cohen’s recommendations and highlights the delays and lack of action to date. This service is provided by Watershed Watch Salmon Society and the SOS Marine Conservation Foundation due to their grave concerns regarding government action on the Cohen Final Report and protecting sockeye for future generations.

Watershed Watch Salmon Society was a participant in the Cohen evidentiary hearings and conducted a comprehensive review of the evidence and Final Report.

Watershed Watch Salmon Society (WWSS) has been watching out for B.C.’s wild salmon since 1998. Our focus is to elevate the dialogue surrounding wild salmon and to improve our chances of saving them. Watershed Watch believes that real changes in attitude and behaviour are based on understanding, and that significant understanding requires a broad and deep appreciation of a wide range of habitat, harvest, and management issues. www.watershed-watch.org

The SOS Marine Conservation Foundation (SOS) is a group of successful business leaders, entrepreneurs and philanthropists brought together to protect B.C.’s wild salmon stocks and the marine environment from negative impacts of open net-cage salmon farms and establish B.C. as a leader in creating a globally renowned, stable and viable aquaculture industry. www.saveoursalmon.ca