Coquitlam, BC – Watershed Watch Salmon Society and the Kwikwetlem First Nation are proud to announce a significant reforestation project on the Coquitlam River. Where there were once farm fields, there are now 1.5 acres of new streamside forest that will help feed and shelter four species of salmon.

The Coquitlam River runs through Colony Farm Regional Park, which operated as a provincially-owned farm from 1906 until 1983. Since it was dedicated as a park in 1996 some areas of the park have been enhanced for the benefit of fish and wildlife. This includes the creation of highly productive fish channels (called off-channel habitat) constructed in the former Sheep Paddocks area. The reforestation project augmented this work by providing native vegetation which provides nutrients and shade for the fish. 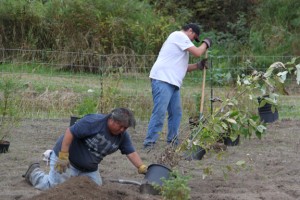 “This is one of several projects to help revitalize salmon populations which have been affected by human activity over the years.” Watershed Watch’s Craig Orr explained “We’ve been working for years to help the river recover, and each of our projects is a small but important part of the puzzle.”

“Salmon to our people is a way of life,” said Kwikwetlem administrator Andrea Aleck. “Kwikwetlem First Nation is very proud to take on projects such as this and make them a priority. We will continue to be at the forefront of salmon habitat restoration in our traditional territory.”

A total of 320 trees, 1,100 shrubs and 1,500 wetland plants were planted at Colony Farm Regional Park thanks to $60,000 in funding from the Fish and Wildlife Compensation Program, which is sponsored by BC Hydro, the Province of BC and Fisheries and Oceans Canada. Tours of the site are available.