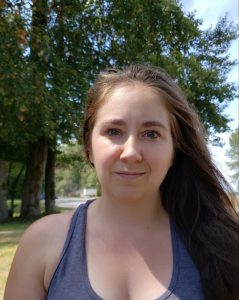 Last week, for the first time since social distancing began, I went out to our riparian restoration site in Pitt Meadows. Since the last time I visited, it had transformed from muddy, brown, and bare to lush and green. It has been a fascinating thing to witness the hand-planted shrubs and trees grow each year and get established. Getting a taste of being out in the field again was definitely the highlight of my week. As we aren’t quite ready to have in-person meetups with volunteers, I wanted to give you all a bit of an update on the site.

For those who are less familiar with our restoration project, work was performed in two phases at a section of streambank on the Katzie Slough. Site One underwent invasive plant removal and replanting in early 2017. Site Two was cleared and replanted in Sept 2019. In total, we restored roughly 200 m of streambank that was once filled with invasive grasses and blackberry.

Now entering it’s fourth growing season, Site One looks great! Plants such as Nootka rose and hardhack are well established, propagating, and filling in the gaps. The willows and maples are getting taller. There are visible trails that are being used by critters, such as beaver, to move between the water and streambank. The site is alive with the sound of insects and birds.

Site Two is just entering its first growing season. Plant survival is good so far, but the site may require some watering this summer if things get too dry. Though Site Two looks a bit sparse compared to Site One, it will fill in with some time and attention.

Both sites will require ongoing maintenance to ensure that the native plants survive and thrive. The invasive blackberry and grasses are ever present, and we need to make sure, especially at our recently planted Site Two, that we give our native plants space and time to get established. The current pandemic has put our plans for volunteer-supported maintenance out the window but I will still be out there taking care of the sites! I hope you can join me soon!

Sign up for our volunteer newsletter to find out about opportunities to get involved with us. 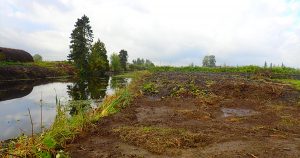 Site One after invasive plants were removed from the site. 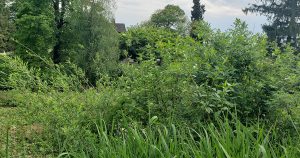 Returning to the restoration site this spring, I was met with a wall of green! 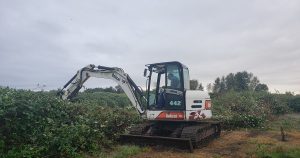 Prior to removal, the site was covered in a dense patch of invasive blackberry. 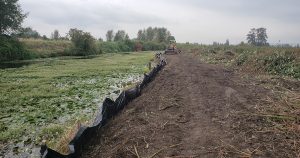 Site Two after the blackberry had been removed. 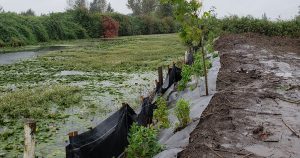 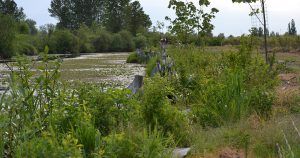 The plants at Site Two are growing well. 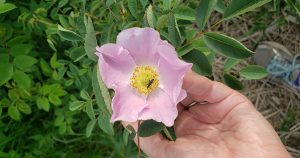 Not the place for those with entomophobia (fear of insects). Bees, ladybugs, and other bugs are all over! 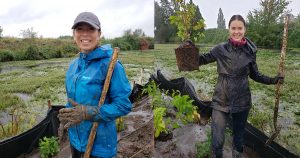 We have an awesome group of staff and volunteers! 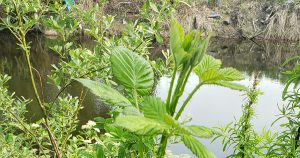 A newly emerged blackberry cane poking out through the native shrubs at Site One.