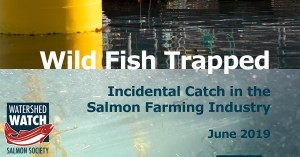 We know there’s a lot of secrecy around salmon farms, and sometimes we have to dig a little to uncover the truth. And that’s what we have done.

Over the last few weeks, Watershed Watch’s Science Advisor, Stan Proboszcz, analysed the federal government’s data on how many wild fish are killed in salmon farms every year and found some shocking things.

Incidental catch of wild fish by salmon farms threatens the health of B.C’s coastal waters. This report exposes more of the fish farm industry’s dark side and its impact on wild fish. It’s time to get open-net pen fish farms out of B.C.’s coastal waters.

If you have not already, please sign our Safe Passage petition calling for the removal of open-net pen salmon farms from wild salmon migration routes.