Red Fish Up the River… Again

Red Fish Up the River… Again

Whether you know it, or not, Coquitlam is a salmon city. The name comes from the Coast Salish language where Kwikwetlem means “red fish up the river” after the red spawning colour of sockeye salmon. Unfortunately, the very sockeye salmon that are such an important part of Kwikwetlem’s history, have been blocked from migrating to and from Coquitlam Lake since 1912. The dam responsible for creating the Coquitlam Reservoir that provides ⅓ to ½ of Metro Vancouver’s drinking water, as well as power generation through the diversion tunnel to Buntzen Lake, has been an insurmountable hurdle for Coquitlam’s sockeye. 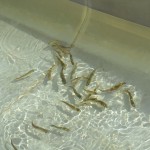 In April 2017, 5,000 sockeye smolts were released to the Coquitlam River in a special ceremony led by the Kwikwetlem First Nation.

Thanks to the efforts of numerous partners in the Kwikwetlem Salmon Restoration Program, we may see red fish in this river once again. The Kwikwetlem First Nation, Watershed Watch Salmon Society, BC Hydro, Fisheries and Oceans Canada, Metro Vancouver, the Province of BC, the Cities of Coquitlam and Port Coquitlam, Port Coquitlam & District Hunting & Fishing Club (PCDHFC), LGL Ltd., R2 Consultants, Living Resources, and other stewards and stakeholders have been working together for years to tackle the challenge of how best to safely get enough smolts out past the dam in the spring and how to sustainably transport any returning adults past the dam and to the Lake in the summer/fall. BC Hydro has provided staff time and funding directly and through the Fish and Wildlife Compensation Program (FWCP). This work would not be possible without so many partners working together and includes hundreds of volunteer hours and equipment contributed by the PCDHFC over more than a decade.

In the spring of 2005, an experimental spring time release of water through Coquitlam Dam resulted in a migration of previously land locked juvenile residualized sockeye, from the reservoir where they migrated down the Coquitlam River presumably to the ocean. In the summer of 2007, there were two recaptures of adult sockeye salmon at the base of the Coquitlam dam that were genetically identified as being returns from those 2005 smolt migrants. Since then, Watershed Watch has managed an adult trap and transport program for any returning adults, while continuing to work with the numerous partners on plans for a longer-term solution to the fish passage challenge.

In April 2017, 5,000 sockeye smolts were released to the Coquitlam River in a special ceremony led by the Kwikwetlem First Nation. This is by far the largest release of Coquitlam sockeye in over 100 years! This summer, we will all be waiting anxiously, hoping that some of these fish will return as adults. The partners of the Kwikwetlem Salmon Restoration Program are also busy planning the next phase of the multi-year effort to restore a self sufficient sockeye run in Coquitlam.

In the meantime, there’s a new way that young salmon champions can help Coquitlam sockeye. Earth Rangers, along with Lehigh Hanson, the Kwikwetlem First Nation and Watershed Watch are inviting all kids to join our team of Salmon Savers and help with the newest Bring Back the Wild project.