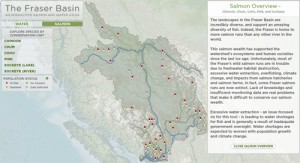 This web-based mapping tool allows users to explore the water and salmon of the Fraser River watershed using a cutting-edge data visualization platform.

The Fraser, BC’s largest salmon-bearing watershed, drains some one third of the entire province – an area the size of California – and the majority of BC’s people call it home. The Fraser Basin boasts 13 sub-watersheds, each one a large river system in its own right, and thousands of smaller rivers, streams, creeks, lakes, and wetlands.

The habitat is tremendously diverse, and so are the salmon. There are well over 1,000 spawning populations from over 70 “conservation units” (populations of salmon that government scientists have determined are genetically unique and irreplaceable).

Unfortunately, the waterways of the Fraser Basin, and the salmon that inhabit them, face many threats, many of which were the subject of a recent judicial inquiry. Now you can use this interactive watershed atlas to learn more about these waterways and salmon populations, the threats they face, and their current status and future prospects. Here you can explore official government data sets on historic water flows, salmon returns, water temperature, and other important factors that affect the aquatic ecosystems that make up the Fraser River watershed.