Yesterday, the long awaited report from Parliamentary Secretary and Member of Parliament, Terry Beech, was quietly released on the DFO’s twitter account. 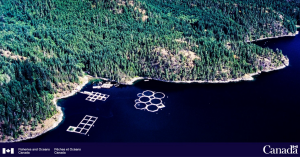 Terry Beech and other federal staff, along with provincial government observer and long-standing wild salmon advocate, Fin Donnelly, conducted consultations earlier this year around the federal government’s commitment to transition open-net salmon farms out of B.C. waters by 2025.

The federal government made this commitment in December 2019 and reiterated it again in January 2021. We’re coming up on 2 years since this promise was made and they still have no concrete plan for the transition. This report was mostly a summary of what they heard through their consultations.

Despite a slow start on this transition promise, this federal government has taken big strides on the factory farm front. Late last year, they announced that factory fish farms will be removed from the Discovery Islands by June 2022, according to recommendations from the Cohen Inquiry.

On a very positive note, up front in the report, Terry Beech explicitly mentions that big decisions will have to be made in June 2022 due to the expiration of the vast majority of factory fish farm licences. Explicit acknowledgement of this by our federal government is significant and presents us with a big opportunity to get more fish farms out next June.

Thanks to everyone that emailed their Member of Parliament about this upcoming deadline. Please continue to do so and also share it widely. You are having an impact!

I think the report is a reflection of the broad array of comments on the issue of salmon farming in B.C. It details many of the concerns and threats posed by factory farms, but it also includes pro-salmon farming talking points. It appears to balance these two perspectives, but we know through several polls, including one last week that the overwhelming majority of British Columbians—75%—want factory fish farms out of the water.

The report also includes the perspectives of First Nations in good depth, which is very positive.

However, the report’s vision statement is something that garners some concern:

“To position British Columbia as a global leader in innovative and sustainable aquaculture production, while protecting and rebuilding wild fish stocks as we transition from open-net pen salmon farming on the West Coast.”

As written, this vision puts aquaculture production before protecting and rebuilding wild fish runs. Technically, this could include some form of ocean-based salmon farming and it is concerning. As mentioned, the report also does not include any details about removing salmon farms at this point, as part of the government’s 2025 commitment. We realize it’s important to remove harmful factory farms in the right manner and guard against the loss of jobs for workers, but also we must move quickly, because many wild salmon populations and their associated economies are suffering.

This is a pivotal moment as we head into federal election territory. It’s critical our elected officials and their parties continue to address the urgency of wild salmon protection. We’re on the right track, but we need to ensure that the federal political parties have strong campaign promises to continue the removal of factory fish farms in B.C.

Right now, we have to march on. Please take a moment to email your MP and share this with your networks.