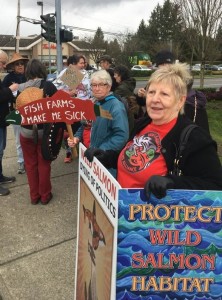 Jackie Campbell’s interest in protecting wild salmon was first sparked in Sointula, a small Finnish fishing village in North Island, right beside Alert Bay. Working on prawn and salmon boats, Jackie raised her son there and considers this remote community a major part of her life. During the downsizing of the commercial fishing industry in the 90s, she and her fellow fishers lobbied government to protect their livelihoods, and won. This was when Jackie first discovered her passion for advocacy and is a large part of why she has been a steadfast volunteer for Watershed Watch.

Through the retraining program offered for those previously employed in the commercial fishing industry, Jackie became a program Manager for a restoration and habitat incentive to restore wild salmon populations. Since 2000 Jackie has lived in Pitt Meadows and wanted to become involved with a waterway in her backyard. She soon connected with Lina, Connected Waters Campaign Manager, and became an integral part of efforts to restore the Katzie Slough — a once thriving salmon slough of cultural importance to the Katzie First Nation. Jackie knows the importance of advocacy and this is why, after 30 years of fighting fish farms, she continues to raise public awareness and speak out on behalf of wild salmon. We’ve all been personally touched by Jackie’s dedication and could not ask for a more wonderful, kind person to champion our campaigns to get open-net fish farms out of our wild salmon waterways and to restore critical habitat along the lower Fraser River.

Thank you a million times over Jackie, you’re truly one of a kind.

Do you want to join Jackie and our awesome volunteer team? Fill out this form and we’ll be in touch.