“”If wild salmon disappear our livelihoods, iconic wildlife, and culture will change forever on this coast.” 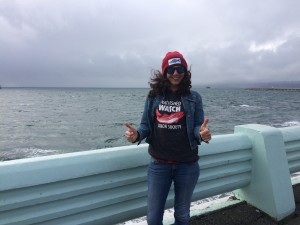 Jenefer is here to make an impact. Growing up on the west coast, and with a background in commercial and sports fishing, she knows the importance of conserving wild salmon.

In 2015, she enrolled in BCIT’s Diploma of Technology in Fish, Wildlife, and Recreation in pursuit of a career in environment. Tasked with creating a short film in her Technical Communications course, she reached out to Lina Azeez, Watershed Watch’s Connected Waters campaign manager, to see if she needed any footage captured. Jenefer had volunteered with Lina several times previously and loved the hands-on experience she had gained in the field. She also recalls learning a great deal from Lina in how she interacted with community members. She considers Lina an incredible mentor and friend and is thankful for all the time Lina invested in her.

We can’t thank Jenefer enough for initiating what has now become a legacy project partnership between BCIT and Watershed Watch. The visual media produced by these talented students helps us to inform and educate the public about the importance of protecting wild salmon habitat in the lower Fraser River, while providing them with practical, applied experience in a relevant field.

Today, Jenefer works in ecotourism as a wilderness guide, showing people the interconnection between wild salmon, the whales and bears they feed, and the coastal forest soils they nourish.

Jenefer continues to volunteer with us, organizing and attending events, collecting Safe Passage petition signatures (she knows first-hand the importance of removing open-net fish farms from our coast), and engaging fellow volunteers.

She recommends getting involved because it’s an incredible opportunity to learn about fisheries, habitat restoration, community engagement, and to get mentored by some pretty rad people. Thanks, Jen! We think you’re pretty stellar yourself.

Join Jenefer and the rest of our awesome volunteer team. Fill out this form and we’ll be in touch.