Where to see salmon spawning

Spawning season provides an opportunity to witness one of the truly great miracles of the natural world. We have compiled a list of some great places to view salmon spawning. Feel free to post in the comments other places to observe salmon spawning near where you live. 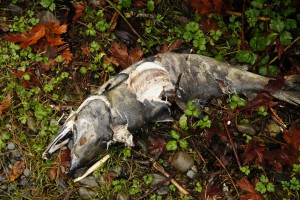 Goldstream is a beautiful park any time of the year, but especially when the chum, coho, and chinook salmon are running in October and early November. There are plenty of walking trails, picnic areas with firepits and an engaging nature house.

Salmon runs begin in late August in Stamp River Provincial Park, running all the way into December. Full of walking trails and beautiful views, you can watch sockeye; coho, and chinook circle the pool below Stamp Falls before climbing fish ladders to get to their spawning beds.

Campbell River calls itself the “Salmon Capital of the World” and is a great spot, not just for fishing, but for seeing spawning salmon. There are a lot of spots to see them running in the fall, pinks in September, and chinook and coho in October and November.

Vancouver and the Sunshine Coast

A 1.5- to 2-hour nature trail, for biking or walking, takes you to Chapman Creek, a spawning channel for chum and coho.

North Vancouver’s Capilano River Hatchery draws more than 225,000 visitors a year. Right up the road from the entrance to the Capilano Suspension Bridge, an information centre educates visitors on the spawning cycle and offers various viewing areas to see the fish. There are also trails to hike which give a fantastic view of the salmon spawning. You can see chinook travelling upstream in October and November and other salmon species throughout the year.

In the Mamquam River, you can see coho, chum and pink salmon spawning between August and November. Walk along the main trailhead toward the river and you’ll find an interpretive sign and spawning channels. Keep walking to where the Mamquam meets the Squamish River for the best viewing.

You can see steelhead, coho, chum and chinook in the Serpentine River that runs through Tynehead Park. Take a walk on the Salmon Habitat loop or get a good view of spawning salmon from late August to November from one of the many bridges. The Serpentine Enhancement Society runs a volunteer-based hatchery here.

Visit Thacker Regional Park in October for a chance to see spawning coho, pink and chum salmon. The hike to a good viewing point is approximately 1 kilometre.

Harrison River has all five species of salmon, with spawning times between late summer to mid-October. In the same area, you can also visit Weaver Creek Spawning Channel, a 3 km man-made spawning channel created in 1965. Chum, sockeye and pink all spawn there, with sockeye spawning in early to late October.

With one of the largest sockeye runs in North America, the Adams River between late September and late October is a great place to see spawning salmon. In Tsútswecw Provincial Park, trails that lead to riverside viewing platforms with interpretive signage describing the salmon run and spawning process. 2018 is a dominant year, which means not only will there larger runs for viewing, but also, the Adams River Salmon Society is hosting the Salute to the Sockeye festival from September 28 – October 21. For information about the Salute to the Sockeye festival, and about guided tours,visit the Adams River Salmon Society website.

Some more sites suggested by our supporters include: