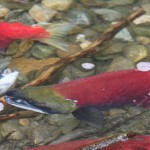 The provincial government’s initiative to develop a “made in B.C. wild salmon strategy,” has been a disaster.

To be fair, the province has taken action on many things that will help wild salmon, like reforming the fish farm industry and improving water management. But Premier Horgan’s hand-picked Wild Salmon Advisory Council, formed last year to tackle the crisis facing B.C. wild salmon, is stacked with representatives of the coastal fishing industry with zero representation from conservation groups and academic scientists and only 2 of the 14 members from interior B.C. communities.

Their recommendations ignore important threats like over-fishing and climate change, while proposing disastrous ideas like industrial-scale artificial hatcheries. Their consideration of economic benefits of wild salmon extend only to fishing, not to wildlife viewing and ecotourism. Steelhead, the only ocean-going salmon species under provincial jurisdiction, and with many populations at risk of extinction, were barely mentioned. Salmon experts across the province are shaking their heads in bewilderment.

Public town hall meetings were announced at short notice, over the winter holidays (with a December 28 deadline for written comments), with no meetings planned for interior communities. Only after a public outcry did the industry-dominated council extend the deadline past the holidays and add a single interior B.C. meeting (in Kamloops). Salmon-loving interior communities across our province, like Terrace, Smithers and Prince George, have been shut out.

The future of B.C.’s wild salmon is too important to be left in the hands of an un-elected council dominated by coastal fishing interests and politicians. We need the input of conservation groups and scientists who specialize in salmon ecosystems. We need the input of interior B.C. communities who rely on wild salmon returning to their rivers and have important local knowledge about their salmon runs.

Watershed Watch has joined scientists, freshwater angling groups and many conservation allies to call on Premier Horgan to fix this broken process. B.C. needs a wild salmon strategy that truly helps wild salmon and can be supported by a broad cross section of British Columbians.

In the meantime, we have presented Premier Horgan with a range of recommendations for salmon restoration projects and management changes that can be swiftly implemented for the immediate benefit of our wild fish.

We extend our thanks to all our supporters and others who have written and called the offices of Premier Horgan and the BC Wild Salmon Advisory Council to tell them British Columbians expect a transparent, comprehensive and science-based strategy for our wild salmon, before it is too late.