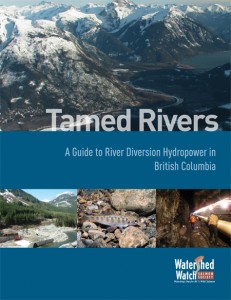 Coquitlam, BC – Privately-operated river diversions are highly controversial in BC. These projects (sometimes called “run-of-river”) are BC’s predominant source of new electricity, but are expensive and highly experimental. A new report released by Watershed Watch Salmon Society is the first of its kind in BC, providing extensive details on the environmental effects and planning of river diversion projects. Tamed Rivers: A Guide to River Diversion Hydropower in British Columbia is a scientifically-referenced and peer-reviewed document that will assist decision makers and citizens alike.

“We know that along with dramatic energy conservation, developing clean energy is part of the solution to climate change,” said Watershed Watch’s executive director Craig Orr. “What we want is good science and good decision making, so that fish and wildlife aren’t needlessly impacted by ill-advised projects. Tamed Rivers is a resource that has been sorely lacking, considering the complexity of river diversion projects and their experimental nature.”

The 64-page report goes through the known impacts of river diversion hydropower on fish and wildlife populations, and identifies several areas that require further study. The authors also propose solutions to deal with the litany of shortcomings in how hydropower projects are planned, assessed, and monitored in BC. While over 1,000 streams and rivers in BC have been staked for hydropower development, the province has no planning process in place to ensure that only the most appropriate projects are considered for development.

Watershed Watch biologist Aaron Hill noted that, “Better science, and more careful planning will help to prevent these projects from ruining the very rivers and valleys that we are seeking to save from the ravages of climate change. The list of necessary improvements is long,” continued Hill, “but for starters we need to divert less water from high value streams, and move away from piecemeal environmental assessments that don’t deal with the cumulative impacts of multiple projects being developed in close proximity to one another.” Concerns over insufficient assessment of “cumulative impacts” are most acute in the lower mainland, which hosts the province’s highest concentration of river diversion projects.

“With all of the recent cuts to environmental protection laws like the Fisheries Act, the Navigable Waters Protection Act, and the Canadian Environmental Assessment Act, and budget cuts to government agencies for enforcing those laws, the need for a careful approach to hydropower development in BC has never been greater,” stated Dr. Orr.

The report is available online at: https://www.watershed-watch.org/resources/tamed-rivers-a-guide-to-river-diversion-hydropower-in-british-columbia/. Watershed Watch’s mission is to catalyze efforts to protect and restore BC’s precious wild salmon. Improving hydropower operations and planning has been part of this work since 1999.