Last month, we finally (re) launched fieldwork for the Resilient Waters project, in collaboration with MakeWay. The data we collect will support efforts to upgrade flood control structures that currently disconnect important salmon habitat in the lower Fraser. 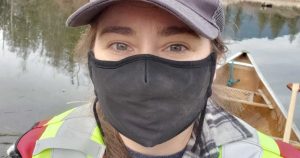 In March we visited three sites in the Fraser Valley, Chilliwack and Agassiz area; we have a total of twenty sites to get through over the coming months.

I am supporting fieldwork led by knowledgeable and experienced members of Pearson Ecological. We are trapping fish, collecting water quality data, and performing amphibian egg mass surveys. I’ve learned a lot and am grateful to have this experience and support work that I know will to lead to positive change.

Day in the Life

On the first day of the week we take clean, empty traps and bait them. These traps will be set in streams for about 24 hours before we pull them out, count and identify what we caught, and reset the traps in a new location along the same waterway — or at a different site. There are two types of traps we use; gee minnow traps and feddes traps. Gee traps are a smaller trap with a finer mesh and holes which work well for catching smaller fish, while feddes traps are much larger and work better for catching large fish. 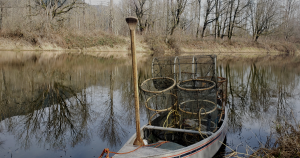 We load up our canoes with as many baited traps as can fit before we canoe and portage our way along the watercourse. As we go, we set pairs of traps at roughly equal intervals. We also put in water temperature loggers, leaving them in place for extended time periods so they can record the temperature at set intervals until they are retrieved.

The day after we set the traps, we head back out to retrieve them. This is the most exciting part of fieldwork—you never know what you might pull up!

Threespine stickleback is a familiar find in the degraded and disconnected waterways we sample in. We have also caught other native species such as prickly sculpin, redside shiner, peamouth chub, northern pikeminnow, and coho salmon. When we catch salmon, we take a few additional measurements on a couple individuals; weighing them and measuring their fork length. We have also taken a small clipping from one pectoral fin of some coho to send for genetic testing to determine which population these individuals are from.

Since these waterways are degraded, they are often home to invasive fish species that can tolerate poorer water quality. So far, the most common invasives we have come across are pumpkinseed, brown catfish and carp.

We don’t just catch fish in these traps—we also catch amphibians such as rough skinned newt and northwestern salamander, aquatic insects, and even the odd leech (I treat them all kindly upon release). After we pull up the traps, we re-bait and reset them in the next section or reach of the stream; or if we are wrapping up for the week we will lod them out to clean before we move to a different site. 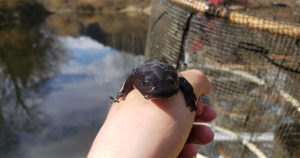 As we canoe through the waterways we also will perform amphibian egg mass surveys. We look in shallow water, or where there is vegetation or woody debris for small spheres composed of a bunch of eggs. Smaller, tightly contained spheres that are attached to a stick or reed are northwestern salamander, while larger egg masses with a looser appearance are from red-legged frogs.

When we pull up the traps, we also use an instrument called a multiparameter to determine water quality. We record temperature, dissolved oxygen levels and conductivity. Conductivity helps us assess how polluted the waterway is.

At each end of a section of stream, we will also set an overnight dissolved oxygen meter that takes readings each hour to see how oxygen in the water changes over a 24 hour period. Higher dissolved oxygen levels are required for species such as salmon. High nutrient levels, a lack of flow, and overgrowth of aquatic plants can cause dissolved oxygen levels to crash and if fish cannot find sections of a stream with higher oxygen, this can be deadly.

This little pond was teeming with redside shiners, a couple coho and two burbot.

Now, I don’t want to paint too pleasant a picture of a leisurely canoe paddle… this is tough and dirty work! We have to pull canoes filled with gear over fallen trees, “paddle” through shallow water that is clogged with vegetation, struggle through knee-deep mud in sections that we aren’t able to canoe in, surveys streams while pushing through fallen branches and invasive blackberry (that have already claimed my first pair of chest waders!) and the mosquitoes are just starting. In spite of this, being in the field is truly rewarding work and after a year spent on Zoom, it is a welcome escape from the home office.

The data collected through this project will help us have a better understanding of the impact that flood control infrastructure has on aquatic species in the lower Fraser River. It will also provide important baseline data if and when improvements are made to these outdated flood control structures. I am looking forward to further supporting this work and I will be sharing more updates over the coming months!