Right now, one of the largest migrations in the animal world is happening here in B.C. While salmon are well known for their amazing journeys back to their home streams to spawn, they also start their lives with an incredible journey, migrating as small and vulnerable fry, out to the ocean where they will spend their adult lives. This is known as the invisible migration. 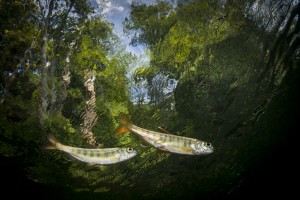 The invisible migration happens in overlapping stages, beginning with pink and chum salmon from March to May, and continuing with peak numbers of coho, Chinook and sockeye smolts leaving their home waters in waves from March to June after staying in fresh water for a few days, a few months, or as many as two years.

The time each species and population will spend in fresh water can vary greatly. Even within the same species in the same river, a diversity of life-history patterns and survival strategies will almost always ensure that some salmon will survive no matter what the conditions, with some going to sea immediately while others stay in fresh water for varying lengths of time. This is a form of “bet-hedging” that serves salmon well. In fact, the stunning adaptability of salmon is one reason why there are so many distinct runs of salmon in B.C. waters and why they can rebound so quickly when their freshwater habitat is healthy and we allow them to spawn.

How can I see the invisible migration? 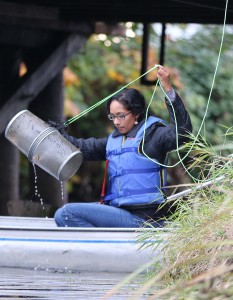 Since juvenile salmon are small and specialized at hiding from predators, often travelling at night, many people miss the chance to observe the invisible migration. But if you know where to look, between March and June, you can observe hordes of birds gathering to feed on them at river mouths. Another way to see them is to ask the streamkeeper groups in your area if they set up fish-counting fences or traps you can visit.

How do baby salmon find their way out to sea when they are hundreds of kilometers inland?

While we still have much to learn about this life stage, in recent years researchers have solved a large part of the mystery. Studies show that an inherited “magnetic map” guides the migration of juvenile chinook salmon.  It has long been known that salmon use the magnetic field as a source of directional information, but it is now known (at least for Chinook salmon) that they also use magnetic information to determine where they are “on the map.” Other studies have shown that salmon can use light polarization patterns and olfactory cues (smell) to find their way out to sea and home again.

The importance of nursery habitat

Life is tough for small salmon. Seventy to 90 per cent of all juveniles will perish, mostly due to predation by other fish, including larger salmon juveniles (e.g. coho), trout, and sculpins. However, predation is less important than habitat in determining the number of fish that survive from egg to migrating fry.

Juvenile salmon, particularly stream rearing species like coho and Chinook who spend time growing in freshwater, need protective side channels to duck into for foraging and refuge. That is why we are working hard to open up blocked salmon habitat in the lower Fraser through our Connected Waters campaign and to defend existing juvenile habitats in the Heart of the Fraser.

Find out more about our Connected Waters and Defend the Heart of the Fraser campaigns.