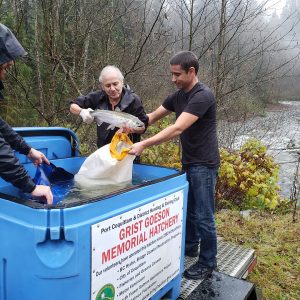 Coquitlam sockeye were blocked from reaching their spawning grounds when BC Hydro (then BC Electric Railway) completed BC’s first hydroelectric dam in 1913. Since 2003, Kwikwetlem First Nation, Watershed Watch Salmon Society, BC Hydro, Fisheries and Oceans, and community members such as the Port Coquitlam & District Hunting and Fishing Club have been collaborating to restore this important run. The Kwikwetlem Sockeye Restoration Program (KSRP) is supported largely by the Fish and Wildlife Compensation Program.

In 2017, KSRP released 5,000 smolts into the Coquitlam River. These smolts were expected to return in 2019, but to the extreme disappointment of everyone involved in this project, no sockeye returned at all last year.

In 2020, despite the on-going efforts of KSRP, only two sockeye were captured in the trap (on July 5 and July 25) and released into the reservoir. (At the moment, for returning salmon to reach the reservoir, KSRP members must catch them in a trap and manually move them above the dam.) A third, a female with a fork length of 540 millimeters, was found dead below the trap on September 21, apparently killed by a predator. Though not a lot of returning fish, it is the most we have had return in six years.

On a bright note, wild adult coho returned to the upper reservoir for the first time in 115 years. The KSRP, with support from Fisheries and Oceans Canada’s Salmonid Enhancement Program, Kwikwetlem Nation, Metro Vancouver, the Grist Goeson Memorial Hatchery, and the Port Coquitlam and District Hunting and Fishing Club, captured coho in the lower river and released them to hopefully spawn in Cedar Creek, including 18 on October 22 and another 13 on October 29. More adult releases are planned, with a release of several thousand coho smolts planned for Spring 2021.

While restoring a salmon population on the brink of extinction is challenging, we take heart in our small successes and hope for more returns in 2021.

Read more about the history of the Coquitlam River.