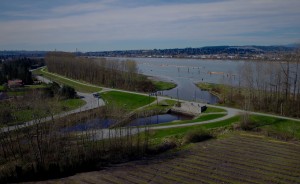 “Our study revealed that these small scale barriers, which are abundant in the lower Fraser, have ecological effects similar to large dams,” says David Scott, the study’s lead author. “Upstream of floodgates we found fish communities which were completely altered relative to reference sites, and dissolved oxygen concentrations significantly below safe minimum standards for fish.”

“This study demonstrates that large-scale habitat restoration can effectively enhance fish production at a watershed scale, at a cost that may be comparable to hatchery smolt production.”

“This study investigated water quality in tidal creeks with and without floodgates on the lower Fraser River, British Columbia, Canada…. Floodgate-induced hypoxia may not only cause local exclusion of sensitive native fishes but may also act as a chemical barrier that decreases connectivity among aquatic systems.”