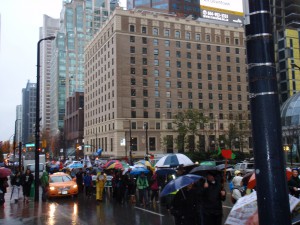 One upshot of the dismal sockeye return to the Fraser River in 2009 was the announcement of a federal judicial inquiry to examine the causes of the decline and DFO’s oversight of the stocks.

Evidentiary hearings of the inquiry began on a rainy October 25th 2010 and despite a downpour, hundreds of people marched and chanted on the streets in downtown Vancouver in anticipation of the first day.  And for good reason, the inquiry led by judge Bruce Cohen is the most powerful mechanism brought to the BC salmon calamity yet, with powers to produce documents and data from government and corporations.

The first week of hearings were introductory, see the transcripts below:

A few interesting tid-bits of information were revealed in the first week. Through David Welch’s testimony on Oct 25 (starts on page 66, line 38) and a report he submitted to the commission, it was suggested that sockeye outmigration survival challenges could be rooted in the Discovery Islands and Johnstone Strait region and it was hypothesized that salmon farms could be a factor.

Another interesting document revealed was a Policy and Practice Report on International Law relevant to the conservation and management of Fraser River sockeye salmon which is a cornucopia of useful legal avenues in which to protect salmon.

Other interesting testimony came on Oct 28 (starts on page 88, line 11) when it was suggested by Dr. John Reynolds that DFO scientists were invited to a Simon Fraser University think tank in December of 2009 to discuss possible factors contributing to sockeye declines but were forbidden to attend by upper DFO staff. A primary goal of this meeting was to synthesize the most convincing theories behind the decline in Fraser sockeye and then present them to the public. The suggestion that scientists were banned from attending these meetings is the first example of DFO information control and censorship exposed through the inquiry—the start of a running theme that continues throughout the commission.

Next, an organizational panel made up of high ranking DFO staff took the stage, transcripts below:

A good outline of the structure and function of DFO was presented during this session.

An interesting exchange regarding the Director General of Aquaculture’s job description occurred on Nov 2 (starts on page 4, line 13). Although Clair Dansereau stated (page 5, lines 17 to 25) that “conservation of our wild stocks and conservation of the fisheries is the top priority in everything that we do” and that “conservation is mentioned in all of our documentation,” it was repeatedly suggested by council that the mandate to conserve wild stocks is not explicitly outlined in the Director General of Aquaculture’s job description; however, expanding the aquaculture industry is emphasized repeatedly throughout the description.

On Nov 3, a timely article in the Globe and Mail was published citing a confidential memo to the Minister of Fisheries that was accessed by the newspaper through the Freedom of Information Process. It reports a number of alarming statements:

“Sockeye salmon have also been found to have brain lesions. Lesions were first detected in 2009 in samples from 2006, a year when 13 million sockeye returned to the Fraser River.”

“The gene response pattern and the presence of lesions have not been directly linked, but they are thought to be related to a viral infection.”

“In subsequent examinations, Fisheries and Oceans Canada (DFO) staff found lesions in the brains of southern BC coho, chinook and sockeye salmon, and across a range of life stages and sample years.”

Given Laura Richards, Director of Science for DFO, was listed as an author of this memo and she was present on the stand the very next day, counsel brought the memo up during the hearing on Nov 4 (starts on page 35, line 19) but were met with great resistance from the Government of Canada and the BC Salmon Farmers Association. After a very heated and lengthy exchange involving many participant groups, a decision was made not to allow the memo to be entered as evidence at this point in time; however, Laura Richards will be brought back specifically to answer to this document at a later date.

The Pacific Salmon Commission (PSC) took the stand next. The PSC is responsible for implementing the Pacific Salmon Treaty and providing regulatory advice and recommendations to Canada and the USA in order to conserve and divide the fisheries appropriately.

On Nov 8 council pointed out that much of the treaty process is comprised of DFO staff and that Environmental Non Government Organization (ENGO) members in the process only hold observer status (starts on page 45, line 25).

Watershed Watch council also introduced the important issue of late run Fraser sockeye experiencing early upstream migration and high rates of mortality, through cross examination of Mike Lapointe, chief biologist from the PSC (page 51, line 18) regarding his report. This issue surfaces repeatedly in future hearings and is connected to the developing story regarding the confidential memo on Nov 4.

Another important document introduced was a report prepared for the PSC synthesizing evidence from a workshop held in June 2010 on the decline of Fraser sockeye.