I was sitting back reflecting on the season just past and the classic metaphor of a glass half full, half empty came to me. If you were one of the few, of the almost 1,300 individual and corporate commercial licence holders, who actually fished this past year, the glass was definitely half empty. Indeed it was a near-final nail in their coffin and will likely have most licence holders—active and inactive —looking to exit the salmon fishery through the recently announced buyback. But more on that later.

The two significant commercial fisheries on the coast were for Somass and Skeena sockeye, where the past three years of cold La Niña ocean conditions supported healthy returns of sockeye. And on the Skeena, industry could not mount the fleet or processing capacity to catch and process their allocation. In fact, it became clear to any observer that if salmon ever returned to the north coast at even a fraction they were 30 years ago, much of the fish would either go uncaught, be shipped to Alaska for processing, or both.

But for people who have been fighting to protect and recover our salmon populations these past years, the glass was indeed half full. No, a corner was not turned. But the corner may be in sight.

Other than for recreational fisheries for Chinook, and illegal, unreported and unregulated (IUU) fisheries on the Skeena and Fraser rivers, we have mostly stopped contributing to the deterioration of our wild salmon populations by continuing to fish them, here in Canada. The elimination of early Nass gillnet fisheries is a good example. These fisheries used to occur well in advance of when DFO knew whether sufficient fish were returning. Nass seine fisheries for pink salmon were shut down as soon as it became apparent that the pink return was poor. The gillnet sockeye fishery on the Skeena was not allowed to continue into August—even though enhanced sockeye were abundant—in order to protect depleted chum, steelhead and wild sockeye populations. The usual exploratory fisheries on the Central Coast were not held in 2022. And on the Fraser, fisheries were not allowed on weaker Early Stuart and early summer sockeye, and fisheries on summer and late-timed sockeye were restricted to seines, because they could release their coho and steelhead bycatch with reduced mortality. Although, most observers—other than the Fraser Panel—suspect we still fished too aggressively based on poor and incomplete information.

The results are promising. We saw larger and better distributed escapements of salmon in the Nass and Skeena, including a very promising return of pink salmon to the Lakelse River.

A notable exception to this promising trend of more precautionary commercial salmon management is Skeena steelhead, where all users—Alaska, First Nations, Canadian commercial, and recreational fishers, along with the provincial and federal regulators—have failed to respond to the reduced abundance of these much-revered fish over the past two seasons. The concern is that if the worst happens—that is, Skeena steelhead continue to return at low levels—and no plans are in place to address the decline, Skeena steelhead will go the way of Interior Fraser steelhead. One hopes that 2023 will see a resurgence, but it may be better to plan for the worst and hope for the best.

Alaskan interception is also an ongoing problem for pinks and chums on the central coast, which continue to return at very low levels. Canada has ended all fisheries on these depleted populations to support their conservation and recovery, but Alaska continues to aggressively harvest them.

On the south coast, we saw excellent commercial fisheries for Somass sockeye and Chinook, supported by a solid multi-stakeholder advisory process. Although, many commentators would hasten to point out that the same benefits have not accrued to those species taken as bycatch, including summer steelhead.

The fall chum salmon returns adhered to the pre-season forecast. Returns were poor to disastrous, with the worst returns being to mid-Vancouver Island hatcheries. Nanaimo and Goldstream fared better, just meeting escapement targets. Fraser chums failed to achieve their target escapement. Fall chum management is an outlier to the trend towards more precautionary management in that DFO went forward with mixed-stock commercial and recreational fisheries in Johnstone Strait in the face of poor forecasts for south coast chums.

Wild Chinook returns continued to be poor to very poor on the south coast. DFO is working with their “clients” in the recreational fishing industry to increase recreational fishing opportunities while conserving wild Chinook. As with the commercial fleet, who faced the same challenges in past decades, DFO and its industry clients in the recreational sector are doing the minimal amount they can get away with, in the least costly and disruptive manner possible, to achieve this objective. This strategy did not turn out well for the commercial sector or the fish.

Coastwide, coho escapements were mostly average or saw some improvement. Although, of course, there were some exceptions. Some Strait of Georgia streams returned below average. On the other hand, there was some encouraging improvement in Interior Fraser coho escapement, which will trigger pressure to increase allowable harvest rates in 2023.

Returning to the Fraser, and the glass half full/half empty metaphor, I see a kernel of hope within a disaster. For the past decade or more, fishing-related mortality on Early Stuart sockeye has been limited to very low levels (less than 10 per cent) to protect and recover this once-abundant and critically important sockeye population. We all watched in awe and wonder as 225,000 Early Stuart sockeye (many times what returned in the 2018 brood year) were estimated by the Pacific Salmon Commission to have escaped past Mission.

But as fate would have it, the Early Stuart return coincided with extremely high water in Hell’s Gate. Most of the Early Stuart sockeye were delayed in the canyon and died en route to their spawning grounds. Only 5,200 effective female spawners survived. Most of these survivors were late-timed migrants that avoided the worst of the water conditions in the Fraser Canyon. This was indeed a disaster.

So where is the success story? If precautionary management for Early Stuart sockeye hadn’t prevailed for the preceding decades, those 225,000 sockeye would likely not have returned in 2022. Their spawning numbers in the preceding generations would have been so reduced that there may have been too few left to respond to the beneficial marine conditions that contributed to the turnaround this year. Further, precaution in previous years meant some run-timing diversity was maintained in the population. If past precautionary management, and the sacrifices it entailed, had not prevailed, it is quite likely we may have witnessed the extirpation of this cycle of Early Stuart sockeye in 2022.

So, a big thank you should be offered to all those who made those sacrifices. DFO has been true to its word and announced a buyback of commercial licences, as commercial fishers have suffered the most economic pain from the collapse of our salmon populations. There are sufficient funds to retire much of the commercial fleet, should fishers choose to take advantage.

What is concerning is that DFO has allocated the funds from the $647 million Pacific Salmon Strategy Initiative (PSSI), which is mandated to ‘stem historic declines in key salmon stocks and rebuild them’. As the majority of the licences to be retired have not fished in some years, there is little conservation benefit to be found in the buyback. Reducing the size of the PSSI by 20 per cent to fund the buyback constrains the once-in-a-generation opportunity afforded by the PSSI. This is not to argue against a buyback (although there is an argument that taxpayers should not be bailing out people who have not relied on fishing income for some years, or large fishing companies) but that the buyback should not come from a fund dedicated to conserving and rebuilding our salmon populations.

Below is the commercial catch of salmon in 2022. Note that 40 per cent of the sockeye caught in 2022 were taken in First Nation commercial fisheries, and other than in the Somass (Barkley Sound), most of these were harvested by selective means. This is progress. It’s something to celebrate. 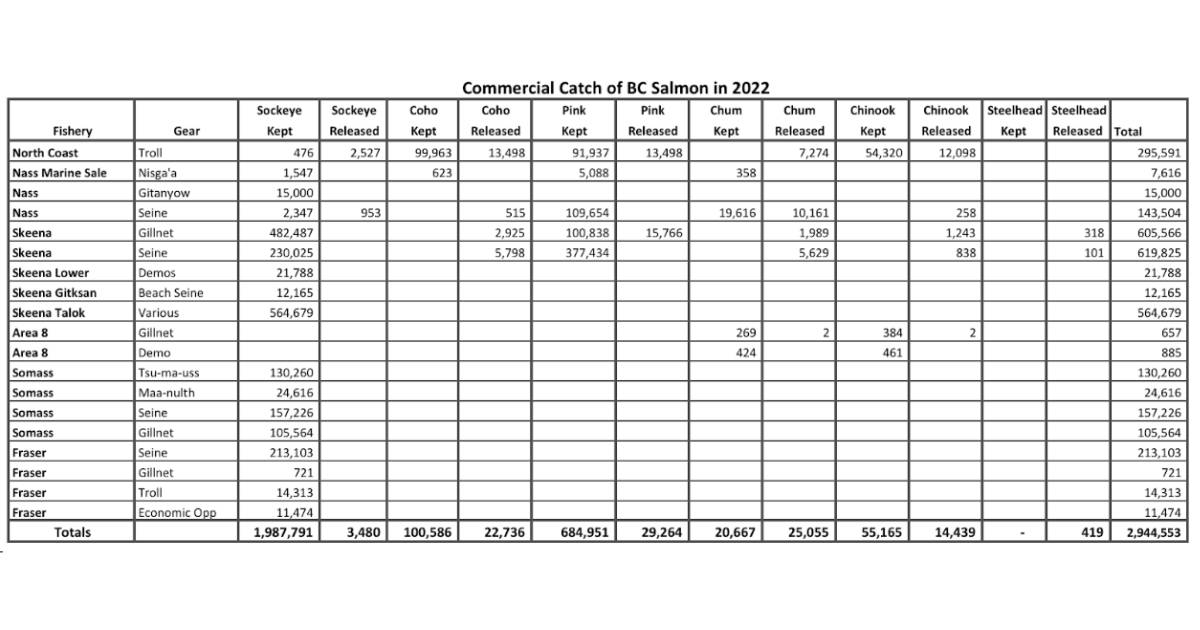