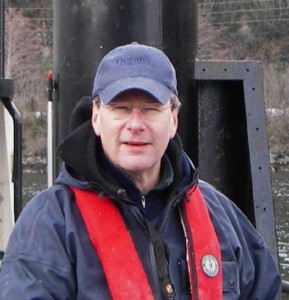 Predicting salmon returns and catches this early in the season is challenging, but instructive.

Many blame this year’s long, cold spring on La Niña, and it is certainly a factor. But cooler than normal water temperatures in the eastern North Pacific this past winter and spring also played a role in us wearing our sweaters much longer than usual. But while we may grumble about the weather, salmon tend to thrive in the cooler than normal ocean waters.

When predicting salmon returns, there are so many contributing factors. Much depends on the terrestrial environment the salmon reared in, what year they went to sea, what part of the Pacific they occupied, and myriad other variables. So, while we assume cooler Pacific waters will generally benefit B.C. salmon, the benefits may not extend to all species and populations.

As someone who spent their career in the salmon fishing industry and who still helps manage one of the largest known-stock sockeye fisheries in B.C., I am feeling the same rush of anticipation I used to feel thirty years ago when salmon were abundant and we were preparing boats and gear for a strong return.

Early indications for sockeye returns from Bristol Bay through to Barkley Sound to the Columbia River are excellent. This includes the Skeena where we are busily preparing for the Lake Babine Nation’s commercial sockeye fishery. It is too early to say anything about the Fraser, but I would expect summer and late-timed Fraser sockeye will meet, or exceed, DFO’s forecasts. My only caution is some Fraser populations face additional challenges in their smolt outmigration than do other eastern Pacific sockeye populations as they migrate through a changing Salish Sea and past aquaculture sites in the upper Johnstone Straits.

Barkley Sound is already past the peak of their sockeye fishery. Barkley was forecast to see a return of 400,000 sockeye. The return has been upgraded three times so far and now stands at an expected 800,000.. Fishing has been good for most and prices remain strong. Unlike many of BC’s commercial fisheries, managers, First Nations and fishers in the area embrace the Wild Salmon Policy and have seen relatively consistent fisheries over the past number of years.

And as on the Skeena, selective known-stock indigenous commercial fisheries on the lower Fraser near Harrison, in Kamloops Lake, on the Upper Fraser, and near Osoyoos are busily preparing their sockeye fisheries to harvest any surplus that escapes downriver mixed-stock fisheries. To avoid confusion, I should mention that the Osoyoos return is an ongoing successful restoration story based on sockeye that migrate up the Columbia River.

I will also step out on a limb and say—based on marginal evidence and a ‘gut’ feeling—that sockeye returns look a bit early relative to the past few years. If the returns are early, predictive models based on average run-timing may overestimate the size of the return. Having said this, I have never seen an early bad return. So, while it may be possible that the returns will not hold up to current indications, I still expect them to be good.

Southeast Alaskan pink salmon, on the other hand, are predicted to be weak and early test fisheries support this. Why should we care about this? Because if Alaskan managers constrain their pink fisheries, it will benefit co-migrating B.C. pink and chum salmon that are caught in Southeast Alaska. I am thinking we may get some pleasant surprises for our north and central coast pink fisheries (it is an ‘off-year’ for Fraser pink salmon), if not for the bycatch of depressed chum salmon harvested as bycatch in these same fisheries. For even if the returns are not great, not losing ±20% of them to Southeast Alaskan fisheries might allow escapements to be achieved  and may even support small fisheries in B.C.

It is much too early to say anything about north and central coast chums other than they will also benefit if Alaska constrains its pink salmon fisheries. Although I note that early chum harvests are strong in Alaska’s Prince William Sound and average in Southeast Alaska. This may suggest modest returns for some B.C. summer chum salmon populations.

I have seen some evidence of good wild and hatchery coho returns. Coho, because they only spend one year at sea (and during what seems to be a positive marine phase), may do well in 2022, but it is too early to say with confidence.

Skeena Chinook are doing better than forecast, which is excellent news, as they were on a steep decline. Most north coast rivers are closed for recreational Chinook fishing again this year, and coastal recreational fishing has been seriously constrained. At the same time, Alaska has unilaterally increased their allotment of commercial Chinook, most of which will be heading to rivers in B.C. and points south.

Unfortunately, returns for stream-type Fraser Chinook, the populations southern resident killer whales depend on, are extremely poor. On the other hand, later-timed Fraser Chinook returning to the Kamloops region, who do not overwinter in freshwater before going to sea, will likely be strong.

The other issue of great concern on the Fraser is the Big Bar landslide. While huge investments have been made, and significant improvements achieved for fish passage at average water flows; our large snow packs, coupled with a late, cool spring and early summer, mean the Fraser River may be flowing at levels that will compromise the ability of early returning sockeye and chinook to make it past the slide. Many sockeye populations returning to spawning areas above the Big Bar slide have done poorly in recent years. They would have benefitted from rebuilding a strong sockeye year like this would have provided.

And a large proportion of the already endangered stream-type Fraser chinook are returning to streams located above the Big Bar slide, which will only add to what appears to be a disastrous year for these populations. These critically depressed populations must pass through a gauntlet of midwater groundfish fisheries off the West Coast of Vancouver Island where they are taken as bycatch, recreational catch & release fisheries from Sooke through the Salish Sea, in-river IUU (illegal, unreported, and unregulated) fisheries, and Food, Social and Ceremonial (FSC) fisheries before they begin what will be a very difficult and stress-inducing migration up a high and turbulent Fraser River.

It is unknown, at this time, what to expect from other wild chinook populations, many of which are depressed and suffering from low productivity. While the Skeena return is better than forecast, it is nowhere near average. And Alaskan wild chinook returns appear to be weak, forcing the closure of many.

The major BC and Southern US hatchery chinook returns, which support most of our recreational and commercial fisheries for chinook, while still a question mark at this time, will likely see reasonable returns. These are classic mixed stock fisheries in that managers seek to balance the economic benefits of the fisheries with their impact on co-migrating wild chinook populations.

Thompson and Chilcotin steelhead are beyond endangered and there is little hope we will see an improvement in 2022. Skeena steelhead, coming off one of their worst years ever in 2021, are a question mark, although they are coming off poor brood years. And this year Skeena steelhead will face extensive fishing pressure in mixed stock commercial and food fisheries, although they will, hopefully, get a reprieve from reduced Alaskan interceptions.

As for fisheries themselves, the question you should be asking is, “what fisheries, I thought the Minister promised in 2021 that a great many of BC’s commercial fisheries would be closed for several years in order to help rebuild salmon populations?” As of July 8, the Minister has yet to announce if any fisheries will be closed in 2022. My expectation is, except for maybe a few gillnet fisheries on the Nass and near Bella Coola, it will be largely business as usual. 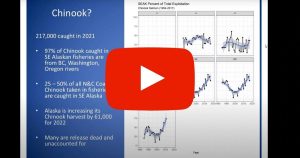 Watch Greg present his outlook at a webinar July 8, 2022.

Read some of Greg’s previous outlooks and updates:

An early recap of 2021 salmon returns

An overview of 2020 salmon returns