Meghan Rooney: A summer update from the field

It’s been four months since I headed out into the field to collect data for our Resilient Waters project: four months of learning, exploring and connecting with others who are passionate about restoring local waterways. Here’s a quick update about our work in the field.

What is Resilient Waters 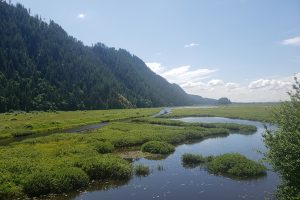 Resilient Waters is a project we developed in collaboration with MakeWay to identify and prioritize flood control infrastructure upgrades for disconnected waterways that once functioned as salmon habitat in the lower Fraser River. We are collecting baseline data on fish and water quality at approximately 20 sites to show how outdated flood control infrastructure negatively impacts water quality and creates conditions that do not support indigenous fish species. (And build support to restore and reconnect these waterways!)

This project supports our Connected Waters campaign which aims to reconnect vital salmon habitats in the lower Fraser.

What sites have we visited? 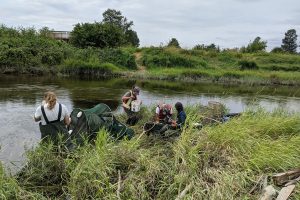 We have visited nearly all of the 20 priority sites on our list over the last four months and are now returning to these sites to collect additional data. Our sites are located in communities across the lower mainland, including Delta, Coquitlam, Pitt Meadows, Langley, Agassiz and Chilliwack. Each site is a bit different. Some are in industrial areas, where the background noise is a steady coming and going of 18 wheelers. Others are in the suburbs, where walkers and bikers often stop on trails to ask what we are doing. Some sites are in waterways adjacent to agricultural land, where we draw the attention of local livestock, or no one at all.

It has been interesting to return to sites we have first collected data at earlier this year. In March, water levels in the Fraser and its side channels were low, but now when we return to sites, water levels are much higher and much of the low-lying areas are submerged. As the field team member most likely to get stuck in the mud, I am very happy to be working in higher water levels and in the canoe most of the time now! More watered sites also means more available habitat for fish, which is a good thing, but lower densities of fish has resulted in us catching less in our traps at this time of year. 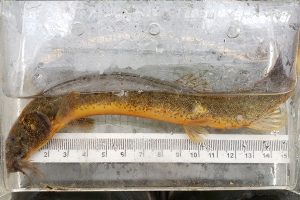 Earlier this year, we also conducted amphibian surveys at several sites, which entails a visual sweep of the waterway, counting and identifying egg masses. But, as indigenous amphibians lay eggs between February and May, we will not be performing more of these surveys this year.

Another change in the last couple months has been that many native fish went through their breeding season, including three-spined sticklebacks, red-side shiners, and peamouth chubs. These fish species, particularly males, develop breeding colours, which helps a lot for fish identification! Since the breeding season began, we’ve been seeing thousands of very small sticklebacks and minnows in the waterways, but they are still small enough to fit through the mesh of our minnow traps. 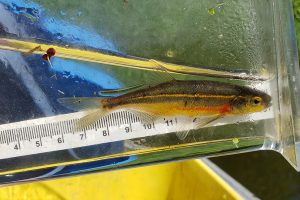 How is the extreme heat impacting waterways?

As the water temperatures have increased, we have caught noticeably fewer salmon in side channels of the Fraser. These salmon have likely moved out into larger waterways with cooler water temperatures, are now heading out to sea, or for the unfortunate ones that get stuck behind flood infrastructure, warm waters likely resulted in death.

High temperatures have also had an impact on our work schedule. Fish get more easily stressed as water temperatures increase (as do the chest-wader wearing field team members) so for the health and safety of the fish and the crew, we don’t work when things get too hot.

What are we finding? 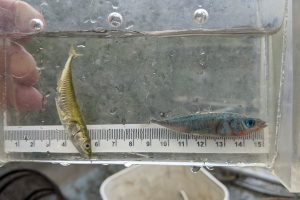 As we continue to collect data, some trends seem to hold (for the most part). As expected, water located behind flood infrastructure is of poorer quality than water at reference sites without flood infrastructure. It’s warmer, less oxygenated, and contains more contaminants. We also see similar trends in fish species we catch in disconnected waterways. Fish found behind flood structures consist mostly of invasive species, and there is often an absence of indigenous fish species who cannot tolerate low dissolved oxygen levels and warm waters. Outside of the flood structure, and at reference sites, there are still invasive fish, but we also find more native fish. 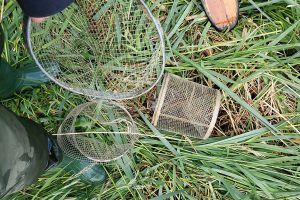 Warmer weather also means more wildlife! Last week alone we saw a great horned owl, deer, and lots of black bears (our one day record is currently eight!). We do everything we can to prevent or limit interactions with bears, but the salmon roe baited traps can be quite the draw. We’ve had a couple traps this season get destroyed by a black bear trying to get their paws on the fish and roe in the trap. 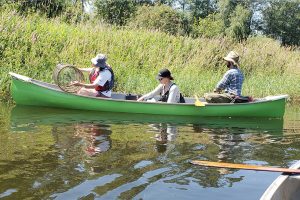 Volunteers and Roxanna in our new canoe on Deboville Slough, Coquitlam

Last week also marked some new milestones. Watershed Watch got our own canoe (put your boat name suggestions in the comments) and we took it out on its maiden voyage on the Deboville Slough in Coquitlam, one of the Resilient Waters reference sites. Not only do we now have a new boat, we brought out our first two Resilient Waters volunteers out in it to help pull traps. I’m looking forward to organizing more spots for volunteers to come take part in our work and learn a bit about local fish and waterways.

And lastly, a small victory, as one of the Resilient Waters priority sites is getting a fish-friendly upgrade this year! The Lower Agassiz Slough is getting a new culvert courtesy of the $27 million Healthy Watersheds Initiative, a program we helped make happen through our Code Blue campaign. This one project will help restore over 7 hectares of salmon habitat.

Stay tuned for more updates from the field in coming months!

Got a minute? Send a letter to your elected representatives asking them to make consideration of wild salmon habitat a requirement of flood infrastructure funding.