Meghan Rooney: What’s beneath the surface?

We’re well into our third month of collecting data as part of the Resilient Waters project to gather baseline data on waterways impacted by flood control infrastructure in the lower Fraser. It has involved many days canoeing waterways from Delta to Chilliwack, setting and pulling fish traps, performing amphibian surveys and collecting water quality data.

Here’s a close up look at some of the species that can be found in local rivers, creeks and sloughs along the lower Fraser that we have trapped so far this year. 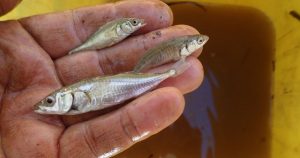 Sticklebacks are a very common fish in Fraser River side-channels. We find them in the vast majority of the traps we set. Sometimes in the hundreds in a single trap. Their name, unsurprisingly, comes from the spines on their back that pop up as a defense mechanism. During spawning season, males can develop beautiful blue and red hues. The image below features two types of three spined stickleback, the smaller stream-type and the larger ocean-type. 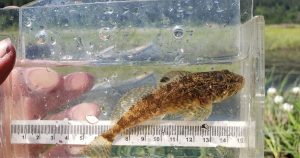 Sculpins are easy to differentiate from other fish due to their body shape. They have a tapered look as they have a large head, mouth and pectoral fins compared to the rest of their body. Prickly sculpins get their name from the feeling of their skin when you glide your finger along their sides from their caudal fin up to their heads. 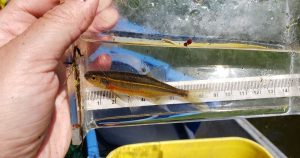 Redside shiners are a species of minnow that are commonly found in waters along the Fraser. Males are easy to identify during spawning season as they develop the telltale red streak along their side.

When we pull up a trap with fish, usually the first giveaway that we caught salmon are seeing fish with parr marks AKA the dark vertical marks on the sides of the fish. The only salmonids to lack parr marks are pink salmon.  Another sign of a salmonid is the presence of an adipose fin*, the tiny, rounded fin between the dorsal and caudal (tail) fin. Another thing I notice is the size of the eye. Juvenile salmonids have big eyes compared to their bodies. *Hatchery raised salmonids sometimes have their adipose fin clipped off as a way to mark them as coming from a hatchery. 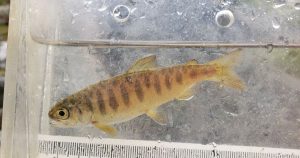 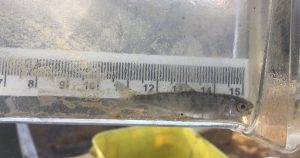 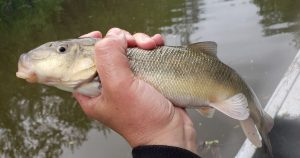 Suckers have downward facing mouths and as their name suggests, large scales! This species can grow to be quite large compared to other species of suckers in the lower Fraser. 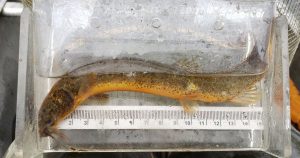 The weatherloach is an invasive species that was likely introduced into local waterways when people dumped out their aquariums. They have a long, eel like body. They are able to survive in degraded waterways with poor water quality. 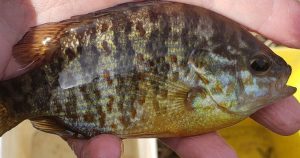 Pumpkinseed are a commonly observed invasive sunfish. They are wide but flat and brightly coloured. 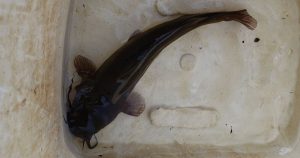 Another invasive species we see sometimes is the brown catfish. They can be identified by their long barbels and the spines on their pectoral fins.

We also have caught a couple species only once or twice so far this year. 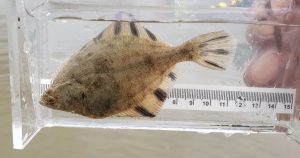 These fish are identified by their flat bodies and orange and black banding on their fins. 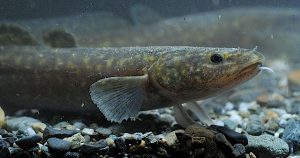 Burbot is a native species that also has a long, eel-like body. They have a single barbel on their chin.

Want to learn more about native fish and other species in BC? Check out Pearson Ecological’s Species ID guides for more information and images!