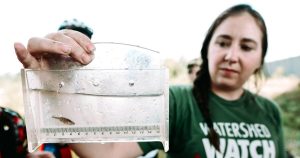 Resilient Waters is a research project we initiated in partnership with MakeWay Canada, to identify and prioritize sites for flood infrastructure upgrades and habitat restoration in the lower mainland. This is my second summer on the data collection team, which is led by Pearson Ecological.

The importance of habitat

Salmon need different types of habitat over the course of their lifetimes. This is particularly true for juvenile Chinook and coho salmon, who require access to slow-moving side channels for resting and feeding before continuing their journey out to sea. Unfortunately, we have blocked access to much of this habitat in the lower Fraser with structures like dikes and flood boxes.

Although the waterways we sample were once fertile salmon habitats, most now have poor water quality, so we typically don’t catch many juvenile salmon. However, each fish we do catch provides valuable information to help answer an important question: what salmon populations use (or would use) side channel habitat in the lower Fraser River?

Whenever we spot a salmonid in our trap, it sets the whole field team into action.

Once we identify the species as Chinook or coho and take a length measurement, a team member pulls out a bag of small vials filled with 100% ethanol and a pair of scissors, while another team member begins to write location details down on a small piece of waterproof paper, including the species, date, waterway and geographic coordinates. We carefully take a small fin clip from the salmon and release it, before transferring the fin clip to the vial of ethanol along with the piece of paper.

We will collect hundred of these samples over the length of the field season before sending them off to DFO for genetic analysis. DFO has a database of genetic information on many coho and Chinook salmon populations in the Fraser River watersheds and the fin clips we collect can be used to identify what populations these fish belong to. 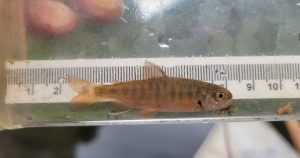 A juvenile coho salmon we caught this year during the field season. This fish was clipped and a sample will be sent off for genetic testing.

During last year’s field season, we collected several hundred samples at over a dozen sites across the lower Fraser, from Delta to Agassiz. We recently got the data back from this analysis and it provides some interesting insights into the habits of out-migrating juvenile Chinook and coho salmon. Here is a quick summary of the results. (The full report by Pearson Ecological can be accessed here,)

Last year, we took 245 fin clips of coho salmon. The vast majority (199 fish) were from lower Fraser populations, such as Chilliwack River, Maple Ridge’s Kanaka Creek, and Hicks Creek, near Agassiz. Interestingly, the majority of the fish we captured at sites in the Pitt River watershed came from upstream locations in the lower Fraser River,

indicating that out-migrating Fraser River salmon head up into the Pitt River watershed to access side-channel habitats before heading back down to the Fraser River and out to sea.

Eight coho were from the Interior Fraser population, which are listed by the Committee on the Status of Endangered Wildlife in Canada as threatened. 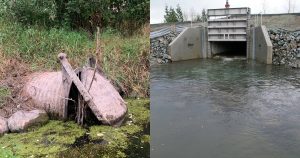 Agassiz Slough floodbox before (L) and after (R) fish-friendly flood control improvements that were completed in fall 2021.

Of these eight fish, one was captured at Agassiz Slough – a waterway that recently received some fish-friendly improvements. Last fall, an outdated flood box that posed a partial barrier to fish habitat on Agassiz Slough was replaced improving habitat connectivity, water quality for salmon and other species and flood safety for the community.

We also caught a couple coho from the Fraser Canyon, and Lower and South Thompson populations. These fish were almost exclusively found in channels in the upstream section of the lower Fraser, around Chilliwack and Agassiz. Twenty-four coho were from unknown populations.

The field team also collected 211 Chinook salmon fin clips in 2021 but the majority of these samples (146) were taken from fish caught in the mainstem of the Fraser River. Of the 65 samples taken at or immediately adjacent to Resilient Waters sites, 32 were taken from West Creek in Langley, one of our reference sites that does not have any flood control infrastructure present. Sixteen 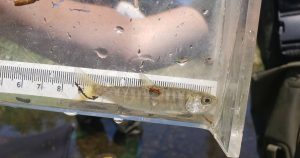 A juvenile Chinook salmon. Some fish are hard to ID in the field, which makes genetic testing even more valuable. Last year the field team had an ID error rate of 6.2 per cent.

Chinook were found at Addington Point, another reference site located in the Pitt River watershed, just up from the confluence with the Fraser. Importantly, fish trapped at this location were not only from the lower Fraser population but Middle Fraser, South Thompson and Upper Fraser populations, indicating that this habitat is used by Chinook salmon from all over the watershed. Addington Point was diked in the early 1900s but in 2004 the dike was breached in two sections to restore salmon access to the marsh, which highlights that if we take efforts to restore access to rearing habitat, salmon will use it.

Of all the Chinook samples taken, we found only three fish had travelled into waterways impacted by flood infrastructure.

Read more about my work in the field last year: https://watershedwatch.ca/meghan-rooney-resilient-waters-fieldwork-one-month-in/

This summer, the field team has been back out collecting more data for Resilient Waters, including taking more fin clips from coho and Chinook salmon. These samples will also be sent off for genetic testing and will provide more insights into what salmon populations could, or would, use currently disconnected rearing habitat in the lower Fraser. This data helps build the case for the need to restore access to this vital habitat — Watershed Watch has found over 1500 km are currently disconnected. 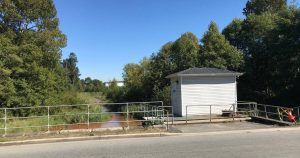 Tilbury Slough in Delta will be getting some fish-friendly improvements next year!

As part of the Resilient Waters project, we have prioritized 25 locations where restoration work would restore salmon access to rearing habitat. The previously mentioned lower Agassiz Slough was one of these sites. Fortunately, another three sites will be also be getting upgrades next year. The Resilient Waters project recently received additional funding to address barriers at several locations in the lower Fraser, including Tilbury Slough in Delta.

Learn more about our efforts to reconnect salmon habitat in the lower Fraser. Check out the Resilient Waters website.

Visit Pearson Ecological’s website to learn more about their work.

And last, but certainly not least, take action here by sending a letter to decision makers asking them to invest in salmon-friendly flood control!